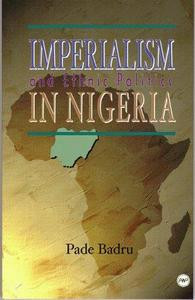 This is a radical departure from traditional analyses of the Nigerian State, which often unduly focus on ethnicity as the motivating force in Nigerian politics. The book examines the class dimensions of the Nigerian political crisis since 1960, when this culturally diverse nation assumed the stature of independent nationhood from the British imperial state. The writer posits that the ruling elite, whether constituted in the military or the civil society, consistently used ethnicity to secure its own class domination in the absence of a coherent class ideology.

The author argues that the military transition agenda to a "democratic state" is nothing more than a ploy by the military elite and its civilian partners to perpetuate themselves in power in spite of international opposition.

The author hopes that a grassroots ideology will emerge and unite all the marginalized strata of the Nigerian society. In the absence of such ideology, the author foresees a fragmentation of the Nigerian nation along ethnic lines, a fragmentation that will most certainly provide a new basis for another civil war similar to, and most possible bloodier than, the Biafra war of 1967-70.

ABOUT THE AUTHOR
PADE BADRU is an associate professor in the department of pan African Studies and Sociology at the University of Louisville in Kentucky. He holds degrees from the City University of London, London School of Economics, and the State University of New York at Stony Brook where he received his Ph.D.