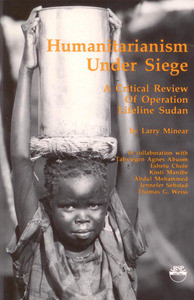 In March 1989, the international community launched a major relief effort to help civilians suffering needlessly from food deprivation in the Sudan's bloody civil war. It was an uphill battle from the start: against the rains, against political sabotage, against recurrent ward and famine.

Operation Lifeline Sudan was a massive international relief effort which helped stave off disaster. Its success was due in large part to the agreement of the warring parties, the determination of aid agencies, the commitment of the international community, and the efforts of the Sudanese people themselves. Yet the initiative itself was not without problems and the civil war continues.

This book tells the story of humanitarian aid, of creative and destructive politics, of elusive peace. Its meaning extends well beyond the Sudan.

"Those concerned about responding to the impacts of famine and war on innocent civilians will find much to ponder in this study."
Former President Jimmy Carter

"...a valuable and incisive report...I commend it to all concerned with providing humanitarian assistance in conflict situations."
Peter J. Davies, President, InterAction