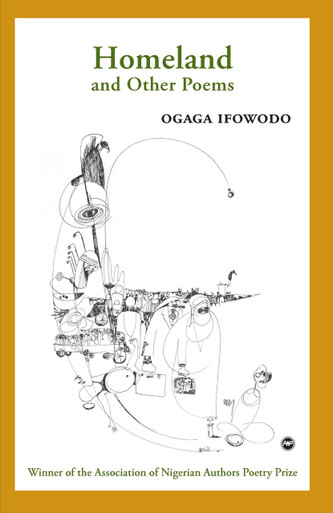 Homeland and Other Poems, Ogaga Ifowodos first collection of poems, employs the idiom of stubborn hope and healing laughter to explore childhood lore, the pains and pleasures of existence, political heroism and villainy, love and tenderness. It is distinguished by a refreshing use of metaphor and an assuredness of expression, qualities that led to its winning the 1993 Association of Nigerian Authors (ANA) poetry prize.

[Ifowodos] craft is sustained by a depth of commitment and a clear vision. In this collection, there is an easy marriage of image and theme as well as an absence of pretensions one sees in collections with similar concerns. Here is a poet who has arrived at maturity and found his own voice.
 Professor Dan Izevbaye, Chair of the ANA panel of judges

I think highly of the poems.
 Wole Soyinka

Ifowodo is without question a leading figure in Nigerias new generation of poets.
 Uzor Maxim Uzoatu, Nigeria Monthly and ThisDay

ABOUT THE POET
Ogaga Ifowodo, trained originally as a lawyer, has also published two other prize-winning poetry collections, Madiba and The Oil Lamp. His poems have been widely published and anthologized. He holds an MFA from Cornell University, Ithaca, New York, where he is finishing doctoral studies in post-colonial literature.