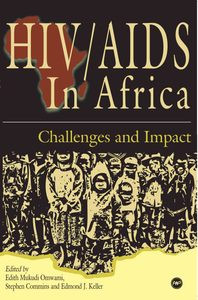 This book brings to the forefront of development discourse the looming, long-term impact of the HIV/AIDS pandemic on the sub-Saharan region. Scholars and practitioners from a range of professions assess the programmatic response to the epidemic to date and examine its impact on the development infrastructureboth human and physical.

In the opening chapter, the demographic impact of AIDS, in the context of the overall impact of other diseases, is examined and how the demographic shifts attributed to the epidemic are affecting national economic development. Subsequent chapters build on this discussion and continue to offer new insights and approaches beginning with the conceptualization of AIDS as a security issue mainly due to the weakening of militaries, bureaucracies, and political institutions that in turn increase the potential for terrorism to gain ground in the region. A case study is presented in the examination of the situation in Angola where decades of civil war decimated national infrastructure, including the health sector. While the war limited the spread of HIV, increased mobility following the cessation of hostilities could increase transmission to areas hitherto not significantly affected.

The developmental impact of AIDS on the tertiary education and health institutions is also discussed. The pandemic has negatively affected the capacity of these institutions to contribute towards human capital accumulation by disrupting their operational capabilities. Universities have been losing manpower as their staff and faculty fall victim to the virus resulting in these institutions having to make increased payments for staff health care, funeral, costs and early benefits, which have reduced resources available for their core missions of training and research. Following that is an analysis of civil society organizations illustrating key attributes of community responses to the pandemic. Community organizations, by virtue of their proximity to those impacted by AIDS, could provide creative leadership and cultural sensitivity in dealing with the pandemic, which is often lacking when interventions are brought in from the outside.

Another fresh perspective introduced in this volume is the idea of the importance of private sector involvement in the fight against HIV/AIDS. Since AIDS reduces worker productivity, private employers should be spearheading prevention and treatment activities at the workplace. This is particularly important where public sector capacity is limited. And finally, the volume summarizes the various ways that AIDS takes its toll, and reminds us thatat its coreit undermines human well-being. The pandemic compounds the already daunting challenges of crumbling infrastructure, insufficient professional and managerial personnel, climate change, and infectious disease resurgence. This book succinctly captures the multidimensional nature of HIV/AIDS and its profound effects on human resources and capital.

ABOUT THE EDITORS
Edith Mukudi Omwami is Assistant Professor in the Graduate School of Education and Information Studies at UCLA. She also serves as Coordinator for the HIV/AIDS in Africa Initiative of the UCLA Globalization Research Center- Africa. She previously was Coordinator for the UCLA/ USAID Collaborative Research Support Program Child Nutrition Project in Kenya. Omwami has written extensively on African education.

Stephen Commins is Lecturer in the Department of Urban Planning, UCLA. He is also Advisor on Fragile States, International Medical Corps. He has served as Sr. Human Development Specialist at the World Bank, where he was a co-author of the World Development Report 2004, "Making Services Work for Poor People".

Edmond J. Keller is Professor of Political Science, and Director of the UCLA Globalization Research Center-Africa. A former Director of the James S. Coleman African Studies Center at UCLA, he specialized in comparative politics with an emphasis on Africa. Prof. Keller is currently member of the Council on Foreign Relations and has been a policy analyst with the United Nations Economic Committee for Africa. He most recently co-edited a volume with Donald Rothchild titled: Africa-US Relations: Strategic Encounters (2006)