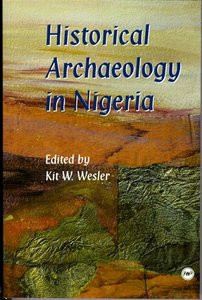 Historical archaeology is experiencing a surge of interest in West Africa, after decades of relative obscurity. The papers in this volume represent the most recent findings by scholars who are committed to melding written history, oral tradition, and archaeological data into a dynamic understanding of the coast of Lagos State, through the Yoruba island once dominated by Oyo and Ibadan, to Benin City, seat of the great pre-colonial empire; north to Zungeru, seat of colonial administration under Lord Lugard, and the Jos Plateau, homeland of the ron people; and south again to the Niger Delta, where the Nigerian people first began their historic interaction with Portuguese explorers.

Studies of modern houses among the Tiv and modern iron-workers at Umundu link the present to the past, through continuity and change. A final chapter explores West African historical archaeology in comparative perspective, linking problems and findings in Nigeria to African American and Native American scholarship in the United States.

These papers demonstrate that historical archaeology will make a critical contribution to exploring the heritage of modern West Africa, from pre-colonial states and empires, through the years of European trade and colonization, into the modern era. Some of the contributors to this study are Phillip Allsworth-Jones, David A. Aremu, S.O. Ogundele and nwanna Nzewunwa.