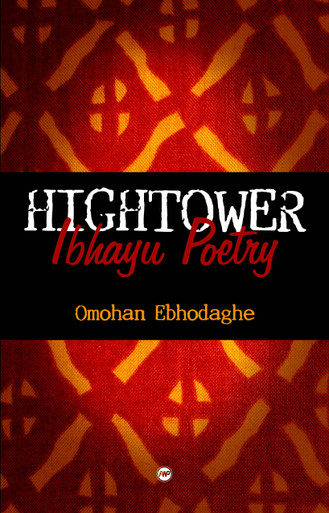 "Hightower" is a collection of poems that delves into the milieu that has prevailed in Nigeria under both the military regimes and civilian administrations that have governed the country since independence in 1960. The collection also focuses on the spirituality of the people including issues concerning "Osonobula" (God), the family, formal education, judgment, service to mankind, jobs, religions, quality food, friendship, monarchy, class, illnesses, racism, death and the afterlife.

"Ibhayu" literally means I did not die and the poems are dedicated to the survival of the Esan ethnic group of southeastern Nigeria from among whom the poet hails. The poetry adopts a new stylistic form comprising six lines of prose to announce the themes. These are followed by four lines of rhythmical beats as supporting details in each of the eight-line stanzas of the poems, which showcase both domestic and academic discourse on law, order and public morality.

'"Hightower" is exciting for many reasons. It masterfully embeds Jehovah Christian essence with Africanness and African spirituality, invoking both the Jehovah God and Osonobula God, (sometimes rejecting importation of Goodlessness) and sometimes also creating a dual personality in a Christian priest, as in the poem Path to Decay  . The styles varied, from inversion, repetition, invocation, to chanting, also give the poetry its rich stamp of cultural duality.'

ABOUT THE AUTHOR
OMOHAN EBHODAGHE served as the Publicity Secretary of the Association of Nigerian Authors (ANA), Lagos chapter from 1993 to 1994. He has co-edited an anthology of poems and short stories titled "Twenty Nigerian Writers: Portraits." He currently lives and works in London, England courtesy of a British Council Lagos office sponsorship. He has a forthcoming short fiction collection titled "A Heart of Their Own."