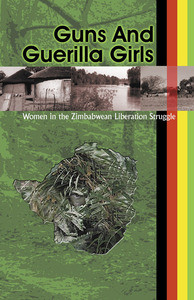 Guns and Guerilla Girls: Women in the Zimbabwean Liberation Struggle is about women guerilla fighters in the Zimbabwean National Liberation war (1965-1980). It provides an examination of the plethora of representations of women who joined the struggle for national independence and contributes to a feminist understanding of Zimbabwe and African history and politics.

Most previously published accounts about women’s roles in the Zimbabwean liberation struggle have tended to focus on their "feminine" or "natural" roles as mothers or alternatively on the post-independence concerns expressed by women in Zimbabwe. Both of these views have ignored and excluded women’s actual experiences of guerilla fighting.

Guns and Guerilla Girls is the first text to both challenge the representations of "women as warriors" and provide a space for women ex-combatants in Zimbabwe to re-present their past and their histories. The text is also original in its aim to create a dialogue within postcolonial discourse in order to facilitate understanding and healing vis-à-vis women’s war time experiences.