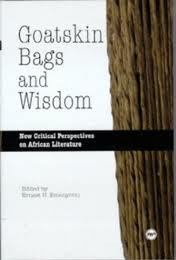 These twenty-eight essays offer a variety of critical perspectives on African literature from scholars, writers and experienced teachers of this subject. They reveal the diverse emotions and sensitivities with which Africans perceiving themselves as the target audience of African wirters, respond to contemporary African fiction. The essays are grouped under five categories.

The first group under the title, Theories and Aesthetics include such definitive essays as Charles Nnolim's "Trends in the Criticism of African Literature," Eaenwa-Ohaeto's "African Critics and the Socio-Cutural Responses to African Literature: Implication for Pragmatic Criticism," Athonia Akpabio Ekpa's "Beyond Gender Warfare and Western Ideologies: African Feminism for the 21st Century," and Theodora Akachi Ezeigbo's "Feminist Literary Studies at the Unversity of Lagos."

Section Five, which concludes the book, is devoted to African Writers Responses. It has Babriels Okara's "The World, Poetic Vision and Society," Ifeoma Okoye's "A Writer's Monologue" and Chukwuemeka Ike's "Encounters with Readers and Critics."

Among the contributors are a new generation of vibrant young African writers whose studies include the works of a number of established and emerging African Writers about whom there is little criticism now in existence.

Ernest N. Emenyonu is professor of African and African American literatures at Southern Connecticut State Unverstiy. He is the former Deputy vice-Chancellor of the University of Calabar, Nigeria.