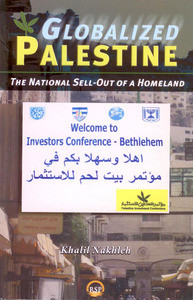 This book is about how truncated, distorted, and mythologized the official claim of Palestinian “development” is, and has become.  Basically, this book is about the role of an informal tri-partite coalition of (1) Palestinian capitalists-political elite, (2) Palestinian “developmental” NGOs, and (3) transnational “aid” agencies in impeding, obstructing and negating, what the author calls, “People-Centered Liberationist Development” (PCLD).  PCLD development, as argued throughout this work, is inherently a process of social and political self-determination and liberation; and, as such, for it to be possible, it aims primarily at resisting and ending foreign occupation, colonialism and hegemony, as well as internally perpetuated apartheid, be it political, economic or social.

Acquiescing to a continued system of occupation, whether enforced directly by the occupying colonial power itself, or through an indigenous Palestinian sub-contracting system of control, is contradictory to developing Palestinian people and society. Elimination of the colonial occupation and apartheid, and its direct or sub-contracted systems of control, is a necessary pre-condition.

This book claims that there is an inherent incongruence between Palestinian absolute dependence on Western international aid, and official expectation that financial aid, whose primary source emanates from Western governments or agencies, is the avenue to developing and emancipating Palestinian people and society from the poverty and pauperization created by the imposed colonial system of occupation that is supported and sustained by these same sources.  The book asserts that aid advanced to Palestine under occupation is political aid par excellence, advanced to the Palestinians, specifically to acquiesce and submit to an imposed political agenda and program.  It shackles, mortgages, and holds hostage the entire current society and future generations in political and economic debt.   It is aid that focuses on consumption and mortgaging people.  It is aid that is anti-production and anti-liberation.

The major focus in this analysis is on the collective impact of the sum-total interventions, over the last quarter of a century, on alleviating poverty, strengthening people’s resilience to withstand and struggle against the continued colonial occupation, and creating a coherent and tightly-knitted social fabric that undermines societal, political and cultural fragmentations, and liberates people, ultimately.

KHALIL NAKHLEH is a Palestinian anthropologist from the Galilee, Israel/Palestine, with a Ph.D. from Indiana University, USA. His main academic and applied preoccupations focused on how to transform Palestinian society and people from an occupied, colonized, and fragmented society to a liberated, productive, free and self-generating society, not dependent on external financial aid. In his long career as an academic and applied anthropologist, Dr. Nakhleh authored and published a number of academic books and articles, in English and Arabic, on Palestinian society, development, NGOs, and education.