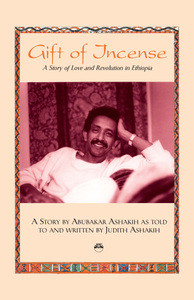 “Gift of Incense chronicles a unique twentieth century story, the emigration to Ethiopia in the early 1960s of Judy Linder and of her marriage to African musician Abubaker Ashakih. What emerges from the pages of this book is not simply a personal memoir but also a living picture of a unique time and place in East Africa before it was forever changed by revolution and famine. The reader, and especially the Western reader, shares through the life story of Abubaker Ashakih the lives of a remarkable group of Ethiopian and Eritrean people in a country that had found a way to balance Muslim and Christian traditions and to create a beautiful and elegant culture that may well have been unique in the modern world. If only for this, Gift of Incense would be a compelling and timely story that cries out to be heard in a world increasingly swept by the winds of intolerance and religious violence. But what also emerges is a picture of an East Africa that has been forever changed and not likely to return. And finally, through the story of her husband and her children, she opens a window onto the loss of a culture as it has been experienced by the expatriate community of East Africans living in the United States.”

“Judy Ashakih has magically interwined loving stories of real people from many cultures and numerous walks of life into a personal account of the political and cultural upheavals in Ethiopia during the 1960s and 1970s."

“In the course of the story we are given an unusual view, by a perceptive foreigner, of Ethiopian and Eritrean culture with its charm and beauty that persist even in the face of adversity.”

“This is a worthwhile reading for students of history and culture studies and for all other lovers of good books that enhance knowledge. Although much as been written about Ethiopia and Eritrea, the refreshing perspectives and autobiographical reflections of two people who were born worlds apart make this book invaluable.”

ABOUT THE AUTHORS
ABUBAKAR ASHAKIH was a composer, musician, and singer for the Imperial Music Department in Ethiopia and owner of two Venus nightclubs in Addis Ababa from 1968-1978.

JUDITH LINDER ASHAKIH left the Office of Public Information of the United Nations, New York, in 1966 for work in the Business College of the Haile Selassie I University, Addis Ababa. After transferring to the Ministry of P.T. & T., she met Abubaker Ashakih. They opened the Venus Nightclub in 1968, operating it together until their 1978 exodus from the revolutionary regime of Mengistou Haile Mariam. She currently operates Bella Bluez, a club in Sandusky, Ohio, originally opened with Abubaker in 1979.