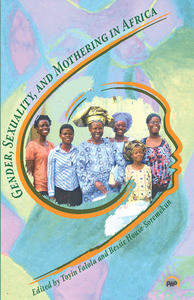 This volume fills an important gap in our understanding of the complex interrelationship between gender, sexuality, and the phenomenon of mothering in African societies. Essays present the social construction of marriage, mothering, and widowhood and discuss the various ways in which marriages were negotiated, the impact of increasing teenage pregnancies and non-formal educational techniques on unwed teenage mothers, the effects of gendered violence on women, as well as the myriad ways in which violence manifests itself in the lives of women as viewed through the prisms of some literary works and dramas. The volume also provides compelling analyses about the increasingly important role of the legal sphere in mediating the conditionality of African women as well as the complex interplay between religion, sexuality, and politics, most especially as they impinge on the roles and status of African women. The chapters demonstrate quite convincingly that African women’s roles are constantly evolving in response to numerous changes in societies and the global economy. This interdisciplinary volume will be of interest to scholars, students, women’s organizations, non-governmental organizations, politicians, public policy advocates, and members of the public at large.

Toyin Falolais the Frances Higginbotham Nalle Centennial Professor of History and Distinguished Teaching Professor at the University of Texas at Austin. He is the recipient of numerous awards through the years including the 2008 Quintessence Award, the 2007 Distinguished Africana Award, the 2007 Amistad Award for Academic Excellence in Historical Scholarship on Africa and the African Diaspora, the 2007 SIRAS Award for Outstanding Contribution to African Studies, and the Africana Studies Distinguished Global Scholar Lifetime Achievement Award from Indiana University Purdue University Indianapolis.