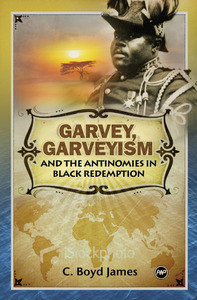 In this copiously researched book, C. Boyd James charts and analyzes significant features of the legend of Marcus Mosiah Garvey and attempts to situate Garvey and Garveyism within the perspectives of his age. Prof. James posits that from the eighteenth century onwards, several ideologies of black liberation and redemption were spawned in the geography of the Atlantic. In Haiti, the proposition was actualized in full scale revolution while Brazil, Jamaica, and the United States witnessed approximately two hundred years of unrelenting rebellion. The aftermath of the American Revolution, and the crystallization of “white supremacy” gave rise to a new wave of ideologies, beginning with the dominant theme of “Back to Africa,” promoted by Martin E. Delaney. This theme remained constant throughout the American Civil War and until the Great Depression of 1893 – 1897.

Thereafter, there emerged a new group of spokesmen, with a shift from “Back to Africa” to “Africa for the Africans at Home and Abroad” with Marcus Mosiah Garvey and his Universal Negro Improvement Association (UNIA) as its chief proponent. This new ideology, in its temporal essence, was not determined by the materialist principle of the social relations of production, but by an absolute divine ordination of “race particularity” and “race absolutism”. It was one of the new racial ideologies, demarcated by reason and freedom that subsumed the centrality of the individual and gave priority to the group and the State, making as though it was absolutely true and necessary.

“Africa for the Africans at Home and Abroad” was a conservative articulation of freedom and liberty by “the excluded” in which God took center stage, governing the universe by His relationship with each race, at a specific time, at a specific place, at a distinct moment in history. Marcus Mosiah Garvey was the leading ideologist and practitioner. The UNIA was not a “Back to Africa” movement but a divinely ordained imperialist teleology driven by an exilic sense of purposefulness. In its absolute meaning, God’s governance follows “a natural order and rights of things.”

Within the body of the deliberations in Garvey, Garveyism and the Antinomies in Black Redemption Prof. James has shed considerable light on many salient issues central to the subject matter, along with providing new insights into questions with which others have already grappled, thereby affording another opportunity toward improving our understanding of the connection between human agents of history and the environment in which their historical mission is played out.

Marcus Mosiah Garvey rightly belongs in the African pantheon, argues C. Boyd James, yet he was no god. Rejecting the romantic portrayals of a messianic leader, James’s biographical treatment of Garvey and his critique of his movement are the best analyses we have to date. In his searing psychoanalytic interpretation, drawing both on archives and 147 former Garveyites and other informants, James puts Garvey and Garveyism squarely within the imperial ambitions of the Atlantic interwar years of the twentieth century. A must read, not only for Pan-Africanists, but for anyone interested in understanding the aspirations of Africans in the Diaspora.
—Anthony S. Parent, Jr., Professor of History Wake Forest University

Truly a rare book that brings Marxist dialectics of the black experience into the twenty first century. A new historical understanding and significance of Marcus Garvey emerges from this symptomatic reading.
—Ntongela Masilela, Professor of Literature, Pitzer College