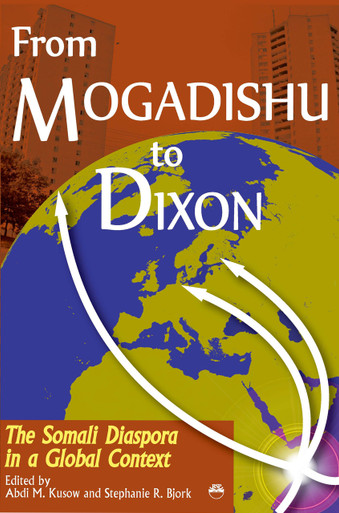 For nearly two decades, and particularly since the civil war, Somali men, women, and sometimes even children without families fled the country in droves. Some sought refuge amongst established Somali communities in the Horn of Africa, the former colonial states of England, France, and Italy, and the Middle East. Others journeyed to new destinations. Today, Somali communities are found in nearly every corner of the world from small rural towns like Barron, Wisconsin and Lewiston, Maine in the United States, to cities like Johannesburg, Sydney, Helsinki, Minneapolis, and Toronto. Diasporic Somalis are just as likely to speak Afrikaans or Finnish, as they are to speak Somali.

This book represents the first attempt to map the social and cultural contours of the Somali diaspora in a global context. Using case studies from Somali communities in Africa, Europe, and North America, the contributors to this volume construct a global framework for studying the Somali diaspora. This framework simultaneously compares dispersed Somalis in different cultural, economic, political, and racial contexts, and captures the fluid, transnational context of the Somali diaspora. The central questions that guide this book are: How do these contexts inform the production and maintenance of Somali diaspora formation? Consequently, how do the making and remaking of diasporic identities affect local Somali communities, the global diaspora community, host societies as well as the homeland communities they left behind?

ABOUT THE EDITORS
ABDI M. KUSOW is Associate Professor of Sociology at Oakland University in Michigan, USA. He has written extensively on transnational migration and racial identities among Somali immigrants in North America. His work appeared in some of the leading journals in sociology and international migration including: Symbolic Interaction, Journal of Ethnic and Migration Studies, and Ethnic and Racial Studies. His edited volume, Putting the Cart Before the Horse: Contested Nationalism and the Crisis of the Nation-State in Somalia, was published by The Red Sea Press, 2004. His article, Contesting Stigma: On Goffmans Assumptions of Normative Order, has ranked in the top 20 most read articles in Symbolic Interaction since 2005. He is the recipient of the 2005 Tenth Annual Oakland University Faculty Research Recognition Award. He is 2007-2010 Vice Chair of the Somali Studies International Association and Vice Chair of the Ohio Organizing Committee for the 10th Triennial Somali Studies International Congress, Columbus, Ohio, 2007.

STEPHANIE R. BJORK is an independent scholar who resides in Phoenix, Arizona, USA. She received her Ph.D. in Anthropology from the University of Wisconsin-Milwaukee. Her dissertation, Diasporic Moments: Practicing Clan in the Somali Diaspora, is an ethnography of everyday life which explores how Somalis in Finland use clan. Her dissertation fieldwork in Finland, 2003-2004, was supported by the American-Scandinavian Foundation and the Wenner-Gren Foundation for Anthropological Research. Her interest in the Somali diaspora developed during her Rotary exchange in Finland, 1990-1991. This period coincided with the arrival of the countrys first Somali asylum seekers. A Fulbright Fellowship to Finland, 2000-2001, culminated in her masters thesis which focused on the production, transnational circulation, and viewing of Somali wedding videos. She is a member of the 10th Triennial Somali Studies International Congress Program Committee.