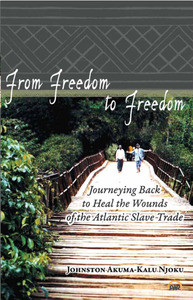 Reaching back to Africa for reconnection has always been important to African Americans. Alex Haley's 1976 novel, Roots: The Saga of an American Family, resulting from retracing the roots of his family to a West African village in The Gambia named Juffure, is perhaps the best known example. Other notable African American leaders who had, long before Haley, journeyed back to Africa include Edward W. Blyden, Marcus Garvey, and W. E. B. Du Bois.  Also worth mentioning among these heroes of the Back to Africa movement is William David Coleman who together with other African Americans from Ashland Kentucky migrated to Liberia and named their settlement Clay-Ashland. Their settlement was named after Henry Clay, a powerful Senator from Kentucky who advocated for a colony for free African Americans in Africa and their former Ashland home-place in America.

From Freedom to Freedomprojects a symbolic journeying back to Africa as a way to help bring healing to the deep-seated wounds of slavery in two countries integral to slave trade, the United States and Nigeria.   The book addresses the three emerging interests among scholars of the Atlantic African Diaspora: (1) the search for African ethnic origins of the descendants of the enslaved Africans in the United States (John Thornton, Michael Gomez, Gendolyn Hall, Douglas Chambers, Paul Lovejoy, etc.), (2) the increasing attention to African voices, inspired by the UNESCO hinterland slave routes initiative (Lovejoy, Carolyn Brown, Akosua A. Perbi, Chima Korieh, etc.) and (3) reconnecting regions and peoples long separated by the transatlantic slave trade (Michal Sobel, Ugo Nwokeji and David Eltis, Michael Gomez, and Henry Louis Gates, Jr.).

The book explores selected folklore motifs and historical narratives about material objects, sites and monuments, as well as the exploits of local slave raiders, escorts, and traders in the oral traditions in Igboland as valid evidence. One of the most remarkable findings is the fact that right from the moments of their capture, the Igbo victims of the Atlantic slave trade always had their eyes on freedom. The information about incidences of slave runaways in Igboland complements the Underground Railroad accounts in the United States.

Based on decoded folklore motifs and insights from the historical narratives about material objects in contemporary Igbo cultural landscape, the author self-consciously develops a trail that seeks to reconnect African Americans of Igbo descent who achieved freedom in the United States, to the state of freedom that was in Igboland before the commencement of the Atlantic slave trade.

Njokus From Freedom to Freedom is an important and truly innovative research which captures a neglected but essential part of the Transatlantic Slave trade and the African odyssey.

"Professor Njoku's book is a remarkable study that connects folklore and material culture to the slave trade in eastern Nigeria and thereby illuminates the human dimension of the journey 'from freedom to freedom'."

Douglas B. Chambers, The University of Southern Mississippi, Hattiesburg

Johnston Njoku teaches Peoples and Cultures of Africa and African American Folklore and Folklife at Western Kentucky University. He researches and writes about how the enslaved Igbo traveled from the interior of Igboland to gain freedom in the U.S. He seeks to reconnect peoples on both sides of the Atlantic long separated by the tragic events of the Atlantic slave trade.