Forbidden Fairways: African Americans and the Game of Golf, by Calvin H. Sinnette, With a New Introduction and Extended Postscript 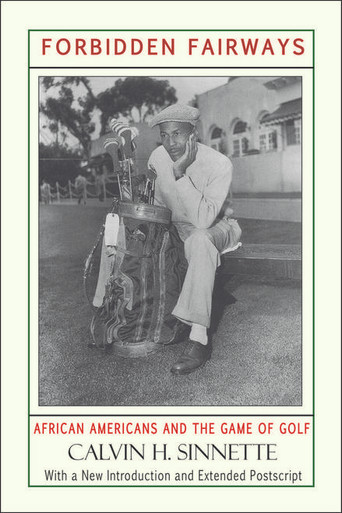 Forbidden Fairways: African Americans and the Game of Golf, by Calvin H. Sinnette, With a New Introduction and Extended Postscript

The emergence of Tiger Woods on the international golf scene has brought the world's attention to the African American experience in golf. But before Tiger, names like Ted Rhodes, Bill Spiller, Ann Gregory, and so many others remained in relative obscurity without being given the chance to compete. Forbidden Fairways is not just a history of the African Americans who have been playing golf for over 200 years but a tribute to them as well. From the unnamed South Carolina enslaved young man who first dared to hit a golf ball when his master wasn't looking . . . to another young man named Tiger who dared to win the Masters while the whole world watched. It's a sad story in places, uplifting in others. It's about cruelty, but it's also about courage. It's about pettiness, but it's also about perseverance. It's about golf, but it's about life, too. Descriptive and intuitive, Forbidden Fairways lets you in on the real story.

Included in this edition is a new Introduction by Sinnette, as well as remarks he delivered at the African American Golf History Symposium at the United States Gold Association Museum in Far Hills, NJ.