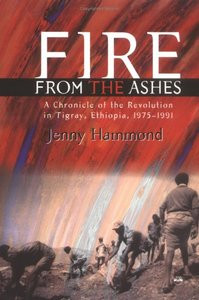 Fire from the Ashes tells the extraordinary story of the Tigray People's Liberation Front (TPLF) revolution, from its beginning in February 1975 by a handful of students, its expansion into the Ethiopian People's Revolutionary Democratic Front (EPRDF) coalition, and their victory in May 1991 over the Soviet-backed military dictatorship of Mengistu Haile-Mariam. The story accumulates slowly through multiple voices and perspectives. It is presented from the point of view of an external observer learning as she goes along. The book is based on three journeys through the war zone, which not only show different points in the process of revolution , but different states I the author's understanding of the history, causes and evolution f this struggle. She investigates the history and goes to the war front. Her quest was to understand this uniquely transforming moment in Ethiopian history form dictatorship to a fledgling democracy.

In this riveting account of her journeys, Jenny Hammond unlocks the hitherto hidden history of the EPRDF liberation movement. She provides the readers with a unique insight into the origin an evolution of the movement and describes the social and political transformation of the society during the war period. For the fist, time the author unveils the unique record of the important of this historical movement through taped interview with EEPRDF leadership, including the present Prime Minister, Meles Zenawi.

ABOUT THE AUTHOR
Jenny Hammond has been a frequent visitor to Tigray since she was invited to go there on a fact-finding tour in 1986. She is the author of Sweeter Than Honey: Testimonies of Tigrayan Women (RSP 1990) which, through the voices of women, provides a unique view of life during the revolutionary struggle. She is a former literature teacher at Brookes University in Oxford and has worked in development education. She is currently at the Institute of Social Anthropology at Oxford University where she is engaged in research into the history of the democratization process in Tigray.