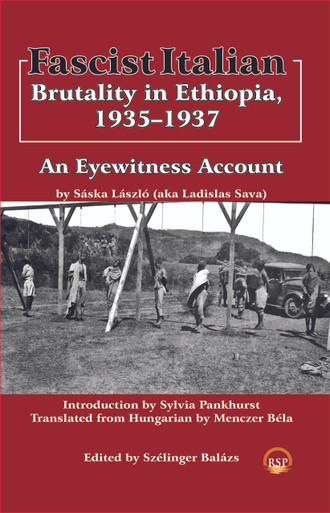 This is an eyewitness account of the war crimes of fascist Italy committed on Ethiopia from 1935-1937. The account is by Dr. Sáska László (1890–1978), a Hungarian physician who lived with his wife, Mojzsis Mária, in Ethiopia between 1933 and 1937. Dr. Sáska was employed by Ras Desta Damtew, Governor of Sidamo. When the Italo-Ethiopian war broke out in 1935, the Sáska couple moved to Addis Ababa, and lived there until 1937.

Sympathizing with the Ethiopians, Sáska and his wife documented their eyewitness account of the Fascist brutality and war crimes. Because of his wide knowledge of different languages, Sáska could collect first-hand information from both sides, i.e. from the local Ethiopian people, and the Italian soldiers, including the German-speaking South Tyrolese ones. As an ethnic minority of the Fascist Italy the latter were usually in the first frontline.

The text was originally written in Hungarian language, between 1937 and 1940. It was translated by Menczer Béla, a Hungarian émigré in London, an author for “New Time and Ethiopia News’’—an anti-Fascist journal then edited by Sylvia Pankhurst. Despite some objections, Sylvia Pankhurst published the memoir in “New Time and Ethiopia News” as a serial in 28 parts between July 1940 and February 1941, some of them with original photographs taken by Sáska (or his wife).

Sáska’s writing style is clear and direct. The publication of the memoir is important for two reasons: First, the full text was almost unavailable. Second, the memoir still has historical importance for wider public and scholars alike. Italian war crimes committed in Ethiopia were never punished. Younger generations, even in Ethiopia, never heard about them. Some Italians, including politicians and even scholars, still claim that poison gas was never used against Ethiopians. Although the Italian government officially admitted the use of poison gas in 1996 (after 60 years!), this is still a silent matter in Italy.

Szélinger Balázs is an independent historian formerly working as an assistant professor at Mekelle University, Ethiopia. A graduate from the University of Szeged, Hungary, his main research focus is the relationship between Ethiopia and Eastern Europe and the impact of the Italo-Ethiopian conflict on world politics.