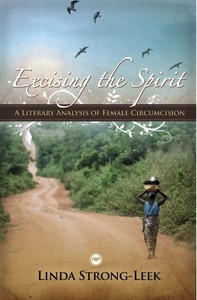 Excising the Spirit: A Literary Analysis of Female Circumcision delves into one of the most complex issues of the modern era, female circumcision, or female genital mutilation. The issue of female circumcision catapulted into the mainstream after the publication of Alice Walker’s novel Possessing the Secret of Joy in 1992, and conversations began worldwide about how to end the ritual.  Although Walker garnered much support for her depiction and denunciation of the ritual, many others decried her almost missionary-like stance on female circumcision, in which she uniformly condemned not only those who practiced the age-old ritual, but also those who performed the operations.

Excising the Spirit seeks to complicate the issue of female circumcision and analyze it from both “within” and “outside” the ritual community, by investigating not only Walker’s text, but three other texts written much earlier than Walker’s, Ngugi wa Thiong’o’s The River Between and Flora Nwapa’s  Efuru and her unpublished manuscript, The Lake Goddess. This analysis also includes the text, Do They Hear You When You Cry?, by Fauziya Kassinjda, who seems to step literally out of Alice Walker’s novel into flesh and blood as a detainee of the United States Immigration and Naturalization Service. Each of the texts offers a very specific insight into the complexity of the cultural, political, and social issues related to female circumcision, and how each of the novelists grapple with these complexities.

One of the major theses of the text is that while Western feminists and others continue to argue for the abolition of female circumcision, they often do so at the expense of African women, who have been fighting, within their own societies, to end practices that are harmful to women and children. Ultimately, many of these feminists in the West utilize the issue of female circumcision to focus attention on the genitalia of African women, which has been one of the main foci of the Western gaze since the transatlantic slave trade began, and to legitimize the continued exploitation of Africa under the pretense of saving African women and children from “barbaric” rituals.

LINDA STRONG-LEEK is an Associate Professor of Women’s Studies at Berea College. Her research areas include Caribbean women writers, African and African American women writers, and African American history. She is currently working on two major projects—a manuscript tentatively entitled, Mami Wata: Spiritual Healing in the Novels of Caribbean Women Writers, and a history of an historically Black secondary school in Winchester, Kentucky, the Oliver Street School, with her colleague, Dr. Dwayne Mack.