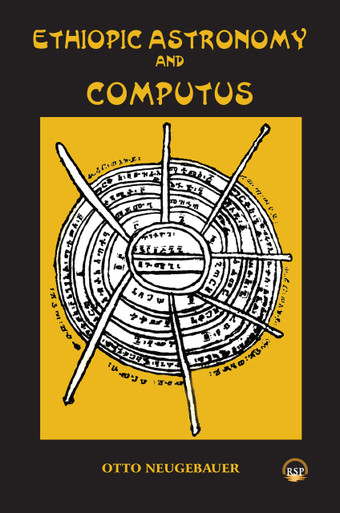 Ethiopic Astronomy and Computus is one of the seminal works of the late Otto Neugebauer. It is still the only detailed work for the English reader on the astronomical/calendar aspect of the Book of Enoch and the calculations of Easter and other movable Christian feasts in the Ethiopian Tewahido Orthodox Church.

“The material here investigated originates from two different classes of sources: the primitive astronomy of the ‘Book of Enoch’ on the one hand, and the cleverly arranged ‘Computus’ of the church calendar on the other. These two groups of sources are separated from each other not only chronologically but also geographically: the Book of Enoch was composed in the last centuries B. C. in the Palestinian area (also represented in the Qumrân archives) while the Computus reflects conditions centuries later within Alexandrian Christianity.”
—from the Introduction

ABOUT THE AUTHOR
OTTO NEUGEBAUER, May 26, 1899 – February 19, 1990, “was the most original and productive scholar of the history of the exact sciences, perhaps of the history of science, of our age. He began as a mathematician, turned first to Egyptian and Babylonian mathematics, and then took up the history of mathematical astronomy, to which he afterward devoted the greatest part of his attention. In a career of sixty-five years, he to a great extent created our understanding of mathematical astronomy from Babylon and Egypt, through Greco-Roman antiquity, to India, Islam, and Europe of the Middle Ages and Renaissance. Through his colleagues, students, and many readers, his influence on the study of the history of the exact sciences remains profound, even definitive.”
—from Biographical Memoir by N. M. SWERDLOW