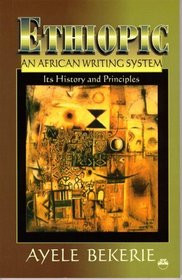 This is groundbreaking book about the history and principles of Ethiopic (Ge'ez), an African writing system designed as meaningful and graphic representation of a wide array of knowledge, including languages. In this important and unique study, Ayele Bekerie argues that Ethiopic is a component of the African knowledge systems and one of the major contributions made by Africans to world history and cultures. The author further elaborates that Ethiopic is a knowledge system which is brilliantly organized to represent philosophical features, such as ideography, mnemonics syllography, astronomy, numerology and grammatology. Ethiopic is not only a cultural agency, but also a foundation to a great literary tradition in Ethiopia, which, for instance, has made a critical contribution to the history of Christianity by organically preserving The Book of Henok, widely believed to be a precursor of Christianity. In a sharp departure from the established view of most Ethiopianists of the old school, Ayele Bekerie contends that the Ethiopic writing system is much older than it has been previously thought, tracing back its origins to as far back as 2,000 B.C.E. This study also explores the dynamic linkages between the Ethiopic and Egyptian writing systems, suggesting the possible relationship between all African writing systems of the Nile Valley.