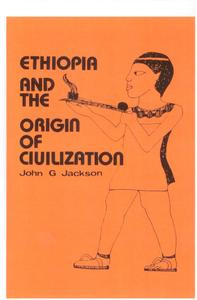 "It is pretty well settled that the city is the Negro's great contribution to civilization, for it was in Africa where the first cities grew up."-E. Haldeman-Julius.

"Those piles of ruins which you see in that narrow valley watered by the Nile, are the remains of opulent cities, the pride of the ancient kingdom of Ethiopia.... There a people, now forgotten, discovered while others were yet barbarians, the elements of the arts and sciences. A race of men now rejected from society for their sable skin and frizzled hair, founded on the study of the laws of nature, those civil and religious systems which still govern the universe."-Count Volney.

"The accident of the predominance of white men in modern times should not give us supercilious ideas about color or persuade us to listen to superficial theories about innate superiority of the white-skinned man. Four thousand years ago, when civilization was already one or two thousand years old, white men were just a bunch of semi-savages on the outskirts of the civilized world. If there had been anthropologists in Crete, Egypt, and Babylonia, they would have pronounced the white race obviously inferior, and might have discoursed learnedly on the superior germ-plasm or glands of colored folk."-Joseph McCare.