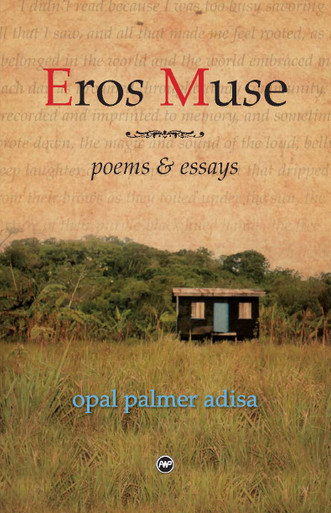 Eros Muse examines the love affair between the poet and her muse. Personifying the muse as her ultimate, possessive lover, the poet explores what it means to be a writer. The essays are more pragmatic in tone and approach and explore the dual role of mother and writer. Yet the poems are more flirtatious, a dance of language and process, a prance, a trot, a sweeping waltz in which the poet and language shimmy across the room.

Not only is this book a series of essays, poems, and journals from one of the Americas most talented and prolific authors, but a virtual how-to manual for those who have to juggle the tasks of writing with those of parenting. Opal Palmer Adisa succeeds, wonderfully.

In Eros Muse, the Jamaican-born Opal Palmer Adisa explores and celebrates motherhood, sexuality, the orgasmic rapture of writing, and language itself  right on down to parts of speech. By asserting that the poem is a seed in quest of the sun, Adisa makes her point: the word remains a procreative force in which she, for one, takes pleasure.

Opal, whose elders lived life with a robust intensity that tingled [her] to the core, does not lessen that familial fury in these poems & essays, cannily meshing sacred rites de passion with the secular/cultural rights of her Caribbean/World cosmos. Her consummate poetics & sensual commitments--in defiance of a storm of norm/s--do indeed tingle us to the core.

Opal Palmer Adisa turns within herself to conjure up some of the external/internal events and experiences that culminated in her becoming a writer. She describes her first stories composed while hiding in tall grasses and her growing efforts to address issues of cultural imperialism, her love of words, and her appreciation of the vibrant energy of her people.

ABOUT THE AUTHOR
OPAL PALMER ADISA, Jamaica-born, is a sought-after speaker who has lectured, read her work and conducted writing workshops throughout the USA, in South Africa, Ghana, Nigeria, Germany, England and Prague. A poet and prose writer, she has seven titles to her credit, including the novel, It Begins With Tears, (1997), that Rick Ayers selected as one of the most motivational works for young adults.