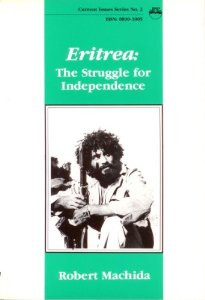 One of the longest and most bitter nationalist armed struggles in African is being fought in Eritrea. The Horn of Africa has been the scene of tremendous levels of political upheaval, famine and intermittent war. At the center of these regional problems is the question of the rights of self-determination of various submerged nations and nationalities. The Eritrean-Ethiopian war is perhaps the most costly human tragedy to afflict the region for the last quarter century.

In this brief historical note, Robert Machida, an American who lived in the region in the 1970s describes and analyzes the historical roots of the Eritrean war of independence. He covers a critical period from the 1960s to 1978, and asserts that this war will not end until the Eritreans can exercise their right to self-determination.

ABOUT THE AUTHOR
ROBERT MACHIDA is a teacher who lives in Glen Cove, New York. In the 1970s he served as a US Peace Corps volunteer in Eritrea, where he witnessed the emergence of the armed struggle for national self-determination.