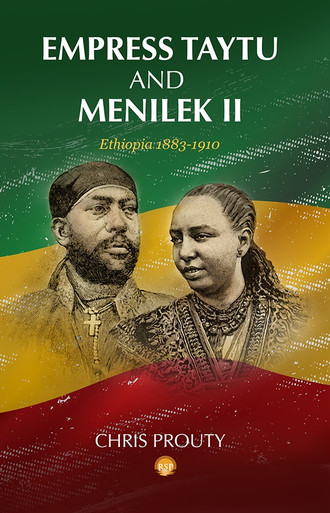 This is a classic and important work on one of the most revered and historic personalities on the most impressive period of the modern history of Ethiopia.  Not only was Empress Taytu a highly regarded and widely recognized Ethiopian patriot that fought a valiant war against the invading Italian Empire of the late 19th century, but she was also an exemplar and unique and popular leader that continues to inspire and empower Ethiopians of subsequent generations up to the present.

“Empress Taytu was the most powerful woman on the continent of Africa in her time, and Menilek was the emperor who brought Ethiopia to world attention with his defeat of Italy in 1896. Diplomatic and internal maneuvering for power and life at the court in Ethiopia between the years 1883 and 1910 are set out in this book in vivid detail and with sound scholarship.”
--Zewde Gabre-Sellassie, D. Phil. (Oxon) Former Deputy Prime Minister and Foreign Minister of Ethiopia

“Menilek's consort, Empress Taytu, has been slighted in other accounts of this important period of Ethiopian history. In this compelling story she is portrayed as what she was - an astute partner of Menilek in domestic politics and justifiably suspicious of European intentions in Ethiopia.”
--Richard Pankhurst Former Director of the Institute of Ethiopian Studies, Addis Ababa

ABOUT THE AUTHOR
The late CHRIS PROUTY was an ardent reader of Ethiopian history which she had the pleasure of pursuing while her husband, also the late Eugene Rosenfeld, was serving the USIS in Addis Ababa, Ethiopia during the reign of the late emperor Haile Selassie.  She had authored and co-authored several other books on Ethiopia. Prouty was a member of the Society of Women Geographers and many other associations focusing on the study of the history of Ethiopia and Africa.