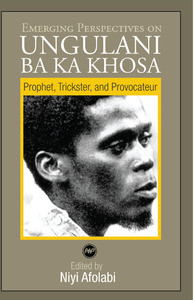 Emerging Perspectives On Ungulani Ba Ka Khosa honors the celebrated Mozambican writer, Ungulani Ba Ka Khosa, who was awarded the 2007 José Craveirinha Prize for his Os Sobreviventes da Noite (Survivors of the Night). Recipient of the Grand Prize for Mozambican Literature in 1990 for Ualalapi which was also selected as one of the 100 best African books of the 20th century, Ba Ka Khosa occupies a significant place in contemporary Mozambican and African letters.

This volume covers criticism, interviews, and translation excerpts of his entire literary corpus to date, namely Ualalapi, Orgia dos Loucos, Histórias de Amor e Espanto, No Reino dos Abutres, and Os Sobriviventes da Noite. The volume ensures that the author finds his due place among his peers in Anglophone and Francophone Africa as well as all over the world—beyond the obscurity engendered by the Portuguese language and limited translation of his works. Issues covered by contributors include mythology, (sub)versions of history and language, deconstruction, memory, magical realism, Mozambican national identity, self and other, anti-epic and identity, regeneration, rebelliousness and corruption, among others.

“Niyi Afolabi has for many years been a conduit to the English speaking world of Lusophone African and Afro-Brazilian writers. The Mozambican storyteller, Ungulani Ba Ka Khosa, is surely a principal figure in contemporary African literature and it is a great thing that Anglophone readers can now know his work, through the timely publication of Emerging Perspectives on Ungulani Ba Ka Khosa.”
—Don Burness, Franklin Pierce University

ABOUT THE EDITOR
NIYI AFOLABI teaches African and African Diaspora Studies in the Department of African and African Diaspora Studies as well as in the Department of Spanish and Portuguese at the University of Texas at Austin. He holds a doctorate in Portuguese and Africana Studies from the University of Wisconsin-Madison. He is the author of The Golden Cage: Regeneration in Lusophone African Literature and Culture, and editor of Marvels of the African World: African Cultural Patrimony, New World Connections and Identities and co-editor of The Afro-Brazilian Mind/A Mente Afro-Brasileira: Contemporary Afro-Brazilian Literary and Cultural Criticism, The Human Cost of African Migrations, Trans-Atlantic Migration, and African Minorities in the New World. His research projects focus on the Brazilian manifestations of African Diasporan discourse and include bilingual volumes on the Black Arts Movement in Brazil (Cadernos Negros/Black Notebooks). He is currently on the executive board of the African Literature Association.