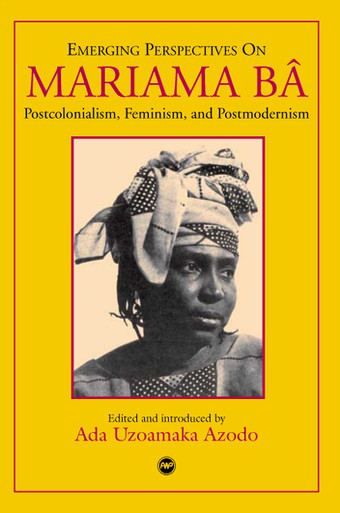 Like good literature, Bâ's writings constitute social texts that renew themselves with each younger generation, each different society, and each new awareness because they are constantly interrogated, subverted, and primed with new meanings. Like the proverbial phoenix, therefore, Mariama Bâ and her fiction rise again and again from their own ashes.

Inspired by Mariama Bâ's life and creative work, this volume celebrates her life and art. She is the winner of the first Noma Award for Publishing in Africa. Bâ's creative work is sparse, given her relatively short life, but compact, vivid, and dense. A long and complete bibliography of the vibrant critical reception of Bâs writings, put together by Renée Larrier, bears testimony to their status, depth, and canonical dimensions. There is practically no school curriculum in the United States that does not feature Bâ's texts either in the original French version or in the English translation.

The insightful and thoughtful essays that make up this collection represent a fascinating spectrum of up-to-the-minute readings, with the most recent methodologies, by a variety of scholars in African literature who do not belong to any one school of criticism, age, occupation, race or nationality. They include such scholars as Jean-Marie Volet, Obioma Nnaemeka, Omofolabo Ajayi, Mary Jane Androne, Lillian Corti, Ada Uzoamaka Azodo, Georges Joseph, Igolima Amachree, and Keith L. Walker. Also included is Harrell-Bond's famous and often-quoted interview with Mariama Bâ, which has been interpreted and translated into English by Olivia Jamin, not to mention Mariama Bâs lone essay on the political functions of written African literatures.

ABOUT THE EDITOR
ADA UZOAMAKA AZODO has a joint appointment in the Departments of Modern Languages, Minority Studies and Women's Studies, Indiana University Northwest at Gary. She is the author of "L'imaginaire dans les romans de Camara Laye" and co-editor of "Emerging Perspectives on Ama Ata Aidoo" (AWP, 1999). She has also published articles on francophone and anglophone Africa in a variety of scholarly journals, including "Mots Pluriels," "Journal of Religion in Africa," "New York Feminist Press," "Research in African Literaures," and "Palabres."