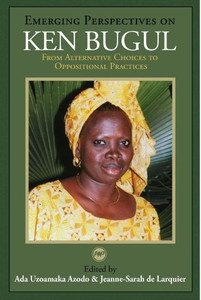 It is now a quarter century since Ken Buguls Le Baobab fou (1983) burst on the scene with its shocking account of a young Senegalese girl experiencing alienation and dislocation as an orphaned child, and marginalization and desperation in her years of exile in Europe. Gone are the comforting images of the African child embraced by the community, raised by the entire village, seeking successful reward for hard work with the scholarship to Europe. The first generation of testimonial novels penned by the francophone fathers of African literature has given way to the Senegalese mothers, Mariama Bâ, Nafissatou Diallo, Aminata Sow Fall, and Ken Bugul, among others. Mothers and daughters, wives and mistresses, have known the spectrum of lives marked by struggle, silence, but also resistance, fulfillment, and above all, a determination to write.

Ken Bugul has written seven novels. She has persisted in conveying the traumatic moments that have marked her own experiences, and has been reaching out increasingly to express the voices of her generation of women in transgressive and bold terms intended, increasingly, to embrace issues facing the larger society. Her work has won her international renown, especially with the Grand Prix Littéraire de lAfrique Noire in 1999 for her third novel Riwan ou Le chemin de sable. A large body of scholarship has
been devoted to her work, although much of it has been in French. This collection is thus a much needed, welcome addition to the field.

The present volume comprises fourteen chapters, an interview, testimonies, and an extensive works cited section. It touches on the wide range of feminist, postcolonial, and literary issues raised in her novels, issues addressed with a broad set of theoretical approaches. At the core of Buguls literary oeuvre, and of these essays, is an underlying ethical concern over the nature of the social fabric especially as it bears on the lives of women in Senegalese society. The collection represents a significant engagement with a major writer, one whose will to speak out has marked her generation.

- Kenneth W. Harrow, Department of English, Michigan State University, Author of Less Than One and Double: A Feminist Reading of African Womens Writing

The editors of the volume show why Ken Bugul should be regarded as one of the three big BsBeti, Beyala, and Bugulmaking a very convincing case for her prescient, avant-garde vision. Creator of a new multi-genre literary sociology, Ken Bugul reveals both necessary toughness and supple resilience: an amazing combination that instantiates feminist reconciliation.