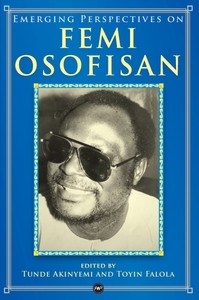 This anthology presents the most comprehensive and up to date critical works on the creative ingenuity of Femi Osofisan, one of the most prolific contemporary African writers. As shown in many of the essays in the volume, Osofisan’s creative works are highly original, innovative, ingenious, and pleasing. The contributors are a distinguished set of literary scholars who have drawn on years of experience and research to present remarkable ideas and original interpretations of the over fifty plays, four works of fiction, four collections of poetry, and two books for junior readers already published by Osofisan. This innovative volume covers a broad range of themes in the writings of Osofisan, including literature and society, gender and women empowerment, style and language use, mobility of oral tradition, and translation/transliteration.

Concerning Osofisan's fundamental aesthetic predilections as an artist, I wish to juxtapose three distinct but related elements: he is extremely productive, extremely prolific; he is endlessly playful and experimental as an artist; and he is very peripatetic, because at any one time, he is at work on many plays, many projects. No matter from which of these three dimensions you look at it, the fact is inescapable: we are talking here of a prodigiousness of talent, execution and jouissance
—Professor Biodun Jeyifo, Harvard University

This is a landmark collection of papers on the works of a remarkable African writer Femi Osofisan. He is arguably, Nigeria’s most purposeful writer and social critic-cum-activist. He has incessantly used his creativity to champion the cause of the marginalized members of the society. Through his outstanding writing across many genres, Osofisan has led his generation of writers on the path of utilizing their writings as a mobilizing tool for social and political change. The range of the contributions on his background and writings contained in this book is a wonderful demonstration of the extensive impact that one of Africa’s most prolific writers has had on the creation, utilization, and criticism of literature on the African continent.
—Professor Akinloye Ojo, University of Georgia, Athens

This book provides the much needed tool for navigating the variety of works by Femi Osofisan - one of Africa’s most prolific and talented writers. The dramaturgy, politics, women, gender, language, oral tradition as well as other numerous themes and scenes of the works are engaged with deep understanding.
—Professor Chinyere G. Okafor, Wichita State University, Wichita, Kansas

This collection is a remarkable achievement, a brilliant and magisterial remapping of the oeuvre of one of Africa's most prolific and accomplished dramatists in its literary, cultural, and political dimensions. Truly representative of the writer's broad thematic and aesthetic canvass, the essays assembled here are the most thorough and engaging interpretation to date of Femi Osofisan's work and, beyond that, of African discourse. The editors' globalist and transnational sensitivities clearly underwrite their choices. No Africanist worthy of that name can afford to ignore the ideas raised in this book. It is with great enthusiasm that I welcome it as a landmark contribution to African thought.
—Pius Adesanmi, Carleton University, Ottawa, Canada

ABOUT THE EDITORS
Toyin Falola is the Frances Higginbotham Nalle Centennial Professor in History and University Distinguished Teaching Professor, University of Texas at Austin. Falola has been presented with three festschriften, various citations, and honorary doctorate. He is the 2006 recipient of the Felix E. Udogu Africa Award, the 2006 Cheikh Anta Diop Award, the 2007 Amistad Award, the 2007 SIRAS Award for Outstanding Contribution to African Studies, and the 2008 Distinguished Award by the African Writers Endowment. He is at the moment writing the second volume of his memoir, tentatively titled Cockroaches for Supper.

Tunde Akinyemi teaches in the Department of Languages, Literatures, and Cultures, University of Florida in Gainesville. He specializes in Yoruba, and also does comparative work on African oral literature and popular culture. Several of his publications have appeared as chapters in books and articles in journals. He co-edited Emerging Perspectives on Akinwumi Isola with Toyin Falola in 2008.