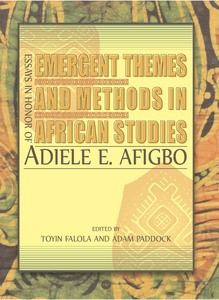 Emergent Themes and Methods in African Studies honors one of Nigeria's pre-eminent historians, Adiele Afigbo, who has made numerous contributions to African history, Archeology, and African Studies over the course of the last forty years. The book reflects on Afigbo's career and contributions while offering chapters on a variety of historical and contemporary issues in Africa. Leading researchers in a wide range of disciplines contributed to the work with chapters ranging from religion, philosophy, economics, human rights, and women's studies among many other subjects. The volume is as diverse in subject matter as the contributions of Adiele Afigbo to the discipline of African history.

“In 2005 Toyin Falola performed a very welcome service to students of the Igbo past by gathering the essays of historian Adiele Afigbo in three volumes. Here is a wide-ranging set of essays to honor Afigbo's half century of contributions to the study of the African past. This wonderful volume deals with a broad range of issues, offering a stimulating array of essays that deal with historiography, culture, gender, nationalism, government, politics, and religion. This is a book that will appeal to a very broad readership. Beautifully produced.”
- Anene Ejikeme, Trinity College

“Afigbo's long career deserves this long festschrift which reflects the range, breadth and depth of his work. The contributors not only highlight his achievements but move us to the future.”
- Ogbu Kalu, Henry Winter Luce Professor of World Christianity, McCormick Theological Seminary

ABOUT THE EDITORS
Toyin Falola, University of Texas Distinguished Professor, holds an honorary doctorate from Monmouth University. He is the recipient of the 2006 Cheikh Anta Diop Award for Exemplary Scholarship in African Studies, The 2007 Distinguished Africana Award by the African New World Program, Florida International University, and the 2008 Quintessence Award by the African Writers Endowment. His memoir, A Mouth Sweeter Than Salt, has won various awards.

Adam Paddock is currently a PhD student in the History Department of the University of Texas at Austin. He received a BA in History from Mansfield University of Pennsylvania in 2006 where he was nominated for the MU Outstanding Senior Award. He has co-authored two essays on social and labor issues in Tanzania and he is currently researching child labor in Nigeria.