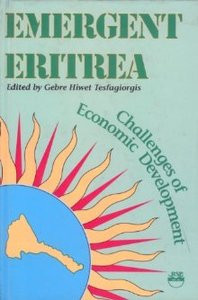 Emergent Eritrea: Challenges of Economic Development is the outcome of an historic conference on economic policy making in Asmara, Eritrea, July 22-24, 1991. The conference was held barely two months after the army of the Eritrean Peoples' Liberation Front (EPLF) brought to an end Ethiopia's thirty-year rule over Eritrea.

Ably edited by Dr. Gebre Hiwet Tesfagiogis, this volume contains a selection of papers presented by various departments of the Provisional Government of Eritrea, and Eritrean academics and development experts from abroad. The book deals with a broad range of economics development challenges faced by an organization that is in transition from a guerrilla movement to a civilian government, entrusted with the administration of an entire country.

The book does not provide a blueprint of economic development, rather it represents a search for a suitable framework to guide the economic destiny of of people who experienced strife and deprivation for several decades. While the book reflects the diversity of opinions expressed by conference participants, it also makes clear that consensus emerged on several key economic development issues.

The essay in this volume, especially those prepared by members of the provisional government, show a paradigm shift from a belief in the state being the key player in economic activities to a reliance on market forces as the basis of economic policy making for emergent Eritrea. The shift undoubtedly evolved over time, but the essays in this volume provide the most substantial documentation of that shift. The address by the chief executive of the provisional government, Secretary General Isaias Afwerki, includes important policy statements setting priorities for the immediate future.