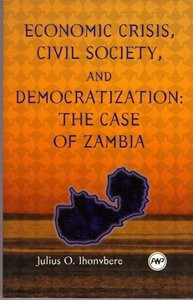 The transition from an authoritarian to an egalitarian form of government is a major paradigm shift for any society. When forces of opposition remain major players, however, the transition is guaranteed to be tumultuous. Thus, any democratizing African nation in which democracy-in any form-is still alive at the end of the its first term is well worth studying, even if only for the light it may shed on the challenges of democratization in post-Cold War Africa. In this, "the first major book on post-UNIP Zambia," the author chronicles the efforts of the Movement for Multiparty Democracy (MMD) in Zambia since 1991 to consolidate democracy and rebuild a civil society-despite fierce competition by the ousted United National Independence Party (UNIP) and ongoing efforts at intervention by Western financial donors/lenders such as the International Monetary Fund and the World Bank.

ABOUT THE AUTHOR
DR. JULIUS O. IHONVBERE teaches African and Third World Politics at the University of Texas at Austin. He has also taught at universities in Nigeria and Canada. He is the author of Nigeria: The Politics of Adjustment and Democracy, co-author of Towards a Political Economy of Nigeria: Petroleum and Politics at the Semi-Periphery, and editor of The Political Economy of Crisis and Underdevelopment in Africa: Selected Works of Claude Ake. His articles have appeared in numerous international journals. Dr. Ihonvbere is the recipient of the First Mario Zamora Award form the Association of Third World Studies.