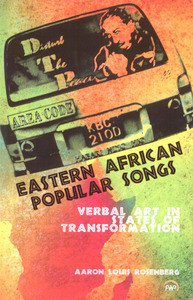 Aaron Rosenberg's study constitutes a provocative reassessment of the relationship between African songs and the literatures of Eastern Africa. The focus of the book is a detailed analysis of language, form, and theme as they apply to a wide spectrum of verbal art in the region. Toward this end literary and musical works throughout Tanzania, Kenya, Uganda, Zambia, Malawi, and the Comoros Islands, among others, are comparatively examined. A consideration of these broad corpuses is necessary in order to determine and describe the salient ways in which such forms of creative expression are deployed as devices which reflect and radically transform prevailing and means of identity formation in and across communities in the region. The investigation deals with songs, poetry, novels, plays and short fiction in a variety of contexts and the manners in which people and populations whose lives extend across various "borders," whether these be ethnic, national, or class derived, develop "supercultural" sense of self. These are identities, themselves fluid, which allow them to shape and adapt to the rapidly changing environments in which they function from day to day. Thus songs and other types of verbal art are shown to be acting in tandem with as well as upon a grand spectrum of sociocultural realities which they describe and explain to their listeners.

The correlation of songs of other forms of "verbal art" allows for a radical interrogation of the long-standing tendencies in literary scholarship to divide creative expression into "high" and "traditional" art. As a result there is little critical room for works that inhabit the broad interstitial spaces between these ostensibly clearly defined types of expression. The bifurcation of literary studies from cultural studies, of which songs are often considered to be a part, is effectively undermined by the concise and wide-ranging series of case studies carried out here across genres and internationally. The author relies upon extensive field research in the region. He also draws upon a plethora of personal interviews with relevant individuals ranging from musicians and authors to average citizens of the concerned countries. As a result he is able to craft a prismatic view of the situations of songs and literature in these communities and the processes through which they are made manifestly relevant to creators and audiences at the same time ast hey facilitate the construction of social realities which allow if not force such individuals to reassess their positions in a rapidly changing world. The close-readings of songs and literature from throughout the region make the book compelling reading for students of African music and literature at the same time as the analysis of African identities in the study makes it particularly relevant for scholars of nationalism both in Africa and on a global scale.

"This important book interrogates boundaries in at least three important fronts: the oral versus the written, the popular versus the mainstream/canonical, and the national versus the transnational... drawing examples from a range of genres that give fresh life tot he contested category of 'orature'-- specifically the presence of the oral written and vice-versa." -Professor Alamin Mazrui, Professor and Chair, Department of African, Middle Eastern and South Asian Languages and Literatures, Rutgers University

ABOUT THE AUTHOR
AARON ROSENBERG is Research Coordinator in the Centro de Estudios de Asia y Africa at El Colegio de Mexico in Mexico City where he teaches literary theory and African literature and oversees the Swahili language program. he has published on African song and literature in Research in African Literatures, Wasafiri, The Journal of the African Literature Association and Estudios de Asia y Africa among other journals. His second book length text, The Face of Infinity: Popular Representations of Death in Africa and Mexico, exploring "inherent hypertexutal links between narrative and visual art in Mexican and African contexts and their implication for the study of organic philosophy, is presently under draft preparation.