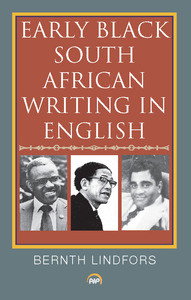 This book examines early black South African writing in English and in English translation, focusing primarily on literature produced in the first decades of the apartheid era. Representative works before and after that period are also considered, especially those that made an impact nationally or internationally. Prominent among the many novelists, short story writers, poets and dramatists discussed or interviewed are Thomas Mofolo, Peter Abrahams, Es’kia Mphahlele, Alex La Guma, Dennis Brutus, Ansuyah R. Singh, Richard Rive, Mbongeni Ngema, and Njabulo Ndebele

"Ever since the early days of African literary-historical writing, the name Bernth Lindfors has leant depth and direction to the developing field."

—Stephen Gray, South African scholar, author, and Professor Emeritus of English at the University of Johannesburg

Bernth Lindfors's Early Black South African Writingin English is a valuable collection of essays and interviews, previously published in a variety of journals, edited volumes and collections of his own writing, some of which have been revised. It provides a wonderful overview of key writers and figures in the South African literary landscape.

“Here is a treasure chest of essays by one of the most renowned critics and historiographers of African literature. Topics range from an exploration of the magisterial work of the Sotho novelist Thomas Mofolo, to a critique of the sometimes controversial early reception of the poetry of Dennis Brutus, to a strongly argued examination of the scandal surrounding Mbongeni Ngema’s so-called HIV / AIDS education play Sarafina 2.  An invaluable collection from a pioneer in the field.”

—Chris Dunton Professor of English and Dean of Humanities, National University of Lesotho

“There really is not another scholar in African literary studies like Bernth Lindfors. For decades he has worked tirelessly to enhance our knowledge of African literature, writing with authority, insight and wit, constantly filling gaps in our critical awareness, forever unearthing material we should have known about but did not. In this rewarding collection of essays and interviews he pays tribute to those pioneering black South African writers—among them Dennis Brutus and Peter Abrahams, Oswald Mtshali and Alex La Guma—who created a new literature and put it to the service of the anti-apartheid struggle. Never one to miss a good story, he investigates with the eye of a detective and the expertise of a seasoned archivist, the mystery behind the publication of Mofolo’s Chaka and the tumultuous rise and fall of dramatist Mbongeni Ngema. In the memorable set of interviews which rounds off the volume, Brutus lucidly reviews his poetic career, Richard Rive speaks movingly on his reasons for remaining in apartheid South Africa when so many others went into exile and Njabulo Ndebele incisively examines the gaps in South African literary history. This volume is vintage Lindfors—perceptive, committed, and as always eminently readable.”

Bernth Lindfors, Professor Emeritus of English and African Literatures at The University of Texas at Austin, is the author and editor of numerous books on African literatures, the latest being Early Soyinka (AWP, 2008), Early Achebe (AWP, 2009), Early West African Writers (AWP, 2010) and Early East African Writers and Publishers (AWP 2011).