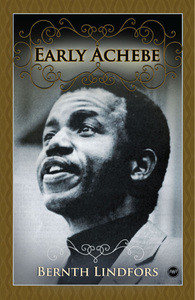 Early Achebe deals with the essays, stories, and groundbreaking novels Chinua Achebe published between 1951 and 1966 during the first phase of the writer’s long and distinguished literary career. Lindfors, a longstanding and renowned scholar and critic of African literature, demonstrates vividly the pervasive influence the subject’s early writing had not only on fellow Nigerian authors but also on teachers and critics of African literature both on the continent and abroad. The book concludes with a previously unpublished lecture by Achebe titled “The Writer and the African Revolution” delivered at The University of Texas at Austin in November 1969, followed by Achebe’s responses to questions he was asked by students, faculty, and townspeople at the time.

Bernth Lindfors—the major sleuth of African literature—has struck gold again. The goldmine reveals a decidedly comic Achebe in his early work, segueing to his more serious writing, the result of the tragedy of Biafra. Few writers want to see their earliest scribbling brought back into full light or photos from long ago reproduced. Credit must go to both Chinua Achebe and Bernth Lindfors for resuscitating these important materials.
—Charles R. Larson,
Author of The Emergence of African Fiction and The Ordeal of the African Writer

If anybody else outside Africa has been helpful in making—to use Chinua Achebe's words about Ulli Beier—”Africans to see themselves through the freshness of their own vision,” it is Bernth Lindfors. With its fondness for the excavating detail, the vernacular elegance of its style, and the unremitting respect and admiration for his subject's integrity as a writer, Early Achebe both enfolds and simulates Achebe's reciprocal pedagogy in all its stylistic and global width.
—Raoul J. Granqvist,
Professor Emeritus of English Literature, Umeå University, Sweden

A coherent critical groundwork and an important contribution to African literary history, Lindfors’s Early Achebe is a unique starting-point for a deeper understanding of the cultural contexts, esthetic roots, thematic commitments, and stylistic features of not only Achebe’s fiction but also his poetry and essays.
—Chukwuma Azuonye,
Professor of African Literature, University of Massachusetts, Boston

As one of the pioneers of African literature criticism and editor of the monumental bibliographical series Black African Literature in English, Bernth Lindfors has made contributions to African literature that are always exciting and full of relevance. His latest book, Early Achebe, which contains Chinua Achebe's earliest writings going back to his undergraduate days at University College, Ibadan, and Lindfors's own earliest essays on Achebe, is a gift of love to students and teachers of Achebe's works, and a necessary addition to the ever-growing body of commentaries in the field of Achebe studies. … Early Achebe is, thus, an important and opportune work; it could not have been issued a moment too soon.
—Emmanuel Obiechina
Associate Fellow, W.E.B. Du Bois Institute, Harvard University, and Fellow of the Nigerian Academy of Letters

ABOUT THE AUTHOR
BERNTH LINDFORS, Professor Emeritus of English and African Literatures at The University of Texas at Austin, is the author and editor of numerous books on African literatures, the latest being Early Soyinka (AWP 2008).