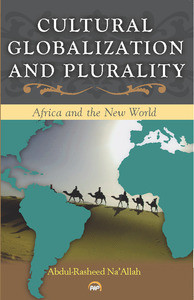 This book presents plurality and globalization concepts from African perspectives, using Yoruba and a few other African cultures as examples. From discourses on New World and twenty-first century migration, trans-nationalism, slavery, to identity and African Islamic cultural performances, the book adopts discourse methodology that is rooted in both African cultural rhetoric and Western analytical traditions. It discusses travel, exile, and the 21st Century pluralistic world and the search for cultural acceptance by immigrants in their newly adopted homes and native communities they left behind.

“… Na’Allah’s greatest achievement in Cultural Globalization and Plurality is not to be found in his analyses of African oral discourse, impressive as these may be. Rather, it is to be found in the manner in which he adduces from those analyses insights that may help us resolve seemingly intractable cultural, social, and political problems in Africa and the Americas. This, ultimately, is what makes Cultural Globalization and Plurality a compelling study, and Na’Allah’s voice one to which we should listen.”

Department of English, University of Toronto

“Dr. Abdul-Rasheed Na’Allah's scholarly intervention in the study of African cultural forms of expression is now well known to Africanists all over the world. Erudite, intellectually savvy and scholarly prudent, this scholar has been a central figure in the discourse of cultural syncretism in global Africa. In his latest intellectual intervention, "Cultural Globalization and Plurality, he deepens our understanding of the meaning of the global south and its cultural expressions, eloquently affirming both the new cultures that emerge out of these experiences and the affective presence that they generate in our contemporary world. Cleverly articulated, this book is timely and indispensable to the discourse of contemporary Africa and it cultural productions in the age of a new vista of globalization. Dr Na’Allah gives this rather difficult and complex topic a fine scholarly edge, simplifying for the reader the complexity of cultural syncretism in Africa. Africanist scholars and culture enthusiasts must read this book.”

Department of English, University of Alberta and author of Ogun's Children: The Literature and Politics of Wole Soyinka Since the Nobel (2004)

"Abdul-Rasheed Na'Allah writes lucidly and with analytical rigor about Africa's inherent cosmopolitanism due to movements of its people, negotiated spaces in communities they build, and the continent's engagement with language, sociality and identity. This is an exemplary comprehensive, well argued and persuasively written analysis of Cultural Globalization and Plurality from the example of Yoruba cultures. The historicity, ethnographies and complex diversity of Yoruba cultures are so well analyzed with remarkable fluency as would a folklorist. An important reading for those interested in Black Atlantic histories and cultures."

Author of Theatre and Postcolonial Desires (2007)

Abdul-Rasheed Na’Allah is a cultural thinker, poet and performer. He recently served as Chair of the Department of African American Studies at Western Illinois University Macomb and is currently Vice-Chancellor and Chief Executive, Kwara State University, Ilorin Nigeria. His books include Africanity, Islamicity, Performativity: Identity in the House of Ilorin (Bayreuth African Studies Series 2009).