COTE D'IVOIRE: The Conundrum of a Still Wretched of the Earth, by Ademola Araoye 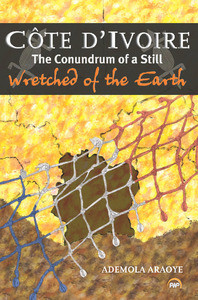 COTE D'IVOIRE: The Conundrum of a Still Wretched of the Earth, by Ademola Araoye

Côte d’Ivoire The Conundrum of a Still Wretched of the Earth explores the internal complexities and the context of the controversial international engagement in the Ivorian crisis.  Bold formulations emerge on the structure of the post-colonial state and its immediate external environment. The environment is populated by unlike units: formal states, proto states, and transnational communities struggle for control. This complex environment is described as “intermestic”. The intermestic environment drives the search for the total appropriation of the space by competing constituent groups and their transnational allies. Intermesticity explains the propensity of internal conflicts to engulf whole sub regions.

The trajectory of the Ivorian crisis is impacted by France’s drive to correct policy failures and re-impose its authority in its pre carré. It portends significant economic consequences and burnishes France’s image in the new hegemonic global order. The confrontation in Côte d’Ivoire is reminiscent of the Algerian war of independence fifty years ago. Desperate France deploys every asset, including military, to chase the Ivorian nationalists from power. It appropriates a democratic discourse to advance its neo imperialist agenda.

The Ivorian election was war: for the nationalists to consolidate a new regime and vision; for the Houphouëtistes to resuscitate a decayed social order; for the rebellion to upend an antiquated social order. The Houphouëtistes are not monolithic in their visions but comply with the dictates of France. The outcome implied profound implications for the ranking of communities in national society. Ivorité becomes a tool to neutralize the consequences of demographic transformations.  Removed from office by the French military, Gbagbo emerges an icon of a deferred revolution.

“As the world moves into a new era of global reach in political and economic power, Ademola Araoye offers in this book a thorough examination of the legacy left by the last period of globalization:  colonialism.  Focusing on the Côte d’Ivoire since the death of strongman President Houphouet-Boigny in 1993, Araoye shows that development of a strong national identity has been impeded by the divisive influence of the three Rs:  region, religion, and resources.  Above all, he exposes the ways in which these within-nation divisions are exploited and exacerbated through continued alignment by international powers with various factions within the country – not only by France and the United States but also by the larger African states.  “By their histories, we shall know them,” writes Araoye.  His exposure of the recent history of the Côte d’Ivoire offers a powerful context and a strong caution for any assessment of the prospects for peaceful democratic and economic development in that country.”

“Ademola Araoye has broken the golden rule: "See no evil, Hear no evil!"  In seeing and hearing about death and disaster, political chaos and wars in Congo Brazzaville, Democratic Republic of Congo, Liberia and Cote d'Ivoire, Araoye has become one of the most endowed observers of post-colonial disorder, offering profound insights on the internal and external forces of power that shape the visible and invisible actions of manipulative political leaders. This book has completely reconfigured our knowledge of internal politics in Cote d'Ivoire.”

ADEMOLA ARAOYE is an international policy analyst with special interest in conflict analysis and management. A former Nigerian diplomat, Araoye has significant lived experience of post conflict societies. He has two daughters.