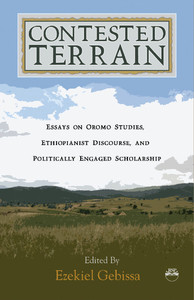 Since 1991, there has been renewed debate in Ethiopia concerning the implication of the country’s past for the present polity. The long-standing debate was given an added impetus by Eritrea’s independence from Ethiopia and the threat of disintegration posed by the continued struggle for self-determination by other ethnonational groups. Ethiopianist scholars, always committed to the indivisibility and unassailability of the Ethiopian state, blamed the country’s political troubles on nationalist scholars, accusing them of fabricating history and instigating people into taking up arms against the state. Vowing to protect Ethiopia from further disintegration, the Ethiopianist elite called on ‘patriotic’ scholars to challenge, expose, and discredit what they described as the ‘politically motivated propaganda’ of irresponsible nationalists.

In Contested Terrain, a team of historians and sociologists confront ‘the scholarship of power’ that dismisses politically engaged scholarship in the name of academic objectivity. Based on the experience of the Oromo in Ethiopia, they tackle the methodological and political challenges of nationalist scholarship within the highly contested terrain of Ethiopian studies and argue that objectivity in scholarship should not mean neutrality in the face of injustice and exploitation. In eight chapters, they show that scholars can recover the experiences of the disadvantaged and underrepresented and give voice to the powerless and downtrodden. They demonstrate that there is no contradiction between challenging prevailing dogmas and inherited orthodoxies in academia on the one hand and giving support to struggles aimed at ending exploitative practices and dismantling institutions of oppression on the other. Academic objectivity must not be a tool for questioning the scholarly value of nationalist scholarship solely on the basis of the scholar’s commitment to certain political causes. As an intellectual enterprise, politically engaged scholarship should be judged on its own merits, not on the basis of its implications for the well-being of political entities.

ABOUT THE EDITOR
EZEKIEL GEBISSA is Associate Professor of History at Kettering University. He is the author of Leaf of Allah: Khat and the Transformation of Agriculture in Harerge, Ethiopia, 1875-1991 (James Currey and Ohio University Press, 2004). He has published several articles in refereed journals. He is past president of the Oromo Studies Association and currently editor of The Journal of Oromo Studies.