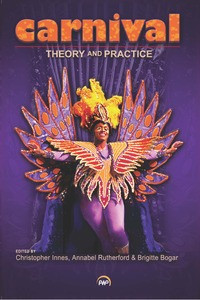 The selection of essays in this volume is designed to give a clear focus on Carnival in the Caribbean and throughout the Caribbean Diaspora, exploring the sources of the Carnival tradition, its history and present state in Trinidad and elsewhere in the Caribbean, as well as carnival developments in London, New Orleans and Toronto.

Putting Carnival in perspective, the volume opens with a brilliant, bravura historical and artistic rant by the pre-eminent Carnival designer, Peter Minshall, provocatively entitled “Nignorance & Enwhitenment,” which covers his own stellar career in highly personal detail, as well as giving an astringent political commentary on what he describes as the degrading commercialization and touristification of Trinidad’s Carnival. The volume then proceeds with a historical review of Trinidadian Carnival, with a grouping of essays analysing its roots in Africa and its development under the slavery of colonial society, together with its current politicized state and social significance.

Exemplifying the ideal of uniting academic theory and artistic practice, essays are included by Trinidad’s leading playwright, Tony Hall, (who has also scripted for Carnival as well as writing and producing a drama based in Carnival), and Geoffrey Chock, the most important Trinidadian photographer, whose images of Carnival as well as Caribbean life are internationally known.

Another major focus of the volume is the social significance of Steelpan music, not only in Trinidad, but also in Britain and Europe—represented by essays written by Haroun Shah, an eminent physician who is also the founder and lead player of Nostalgia Steel Band, and Lionel McCalman, Musical Director of the UK Steelpan Academy.

The volume also includes essays by some of the most eminent scholars in the field of Carnival, African and Diaspora studies—among them Paul E. Lovejoy (Director of the Harriet Tubman Institute for Research on the Global Migrations of African Peoples) and Phil Scher (author of Carnival and the Formation of a Caribbean Transnation). However, the volume is by no means a standard academic work. In fact the majority of the essays are by practitioners, with direct experience of Carnival or of performance, even while they may also be associated with universities.  These include: Loyce Arthur, who has designed costumes for Carnival and numerous productions such as Mozart’s The Magic Flute, and is at the same time Head of Design in the Theatre Arts Department at University of Iowa; Jeff Henry, the founder and Artistic Director of the Black Theatre Workshop Montreal and Theatre Fountainhead Toronto, who is a one-time Chair of the Theatre Department at York University; and Bruce Boyd Raeburn, a professional drummer, who is also curator in the Hogan Jazz Archive at Tulane University.

CHRISTOPHER INNES is Distinguished Research Professor at York University and the Canada Research Chair in Performance and Culture. A Killam Fellow of the Canada Council, a Fellow of the Royal Society of Canada and of the Royal Society of Arts (UK), he is author of 16 books – translated into eight languages—and Editor of the “Cambridge Directors in Perspective" series, and the “Lives of the Theatre” series. He has organized several international conferences, most recently “Carnival: ‘A People’s Art’ and Taking Back the Streets”.

ANNABEL RUTHERFORD has completed MAs in Dance History, English, and an inter-disciplinary MA in Russian Modernism following a career in the performing arts as a dancer and actress in the UK and USA. She holds a Ph.D. in Theatre Studies from York University.  She has published papers on ballet, drama and Art History and is Dance Editor for Journal of the Oscholars.

BRIGITTE BOGAR is currently training as an opera singer. She has degrees in Music, Theatre and Dramaturgy from the University of Copenhagen.  A production manager, she has organized a series of international conferences, including the Toronto Conference on Carnival.  She has published several articles on Theatre, and has presented at international conferences in Canada, the US, and Europe.