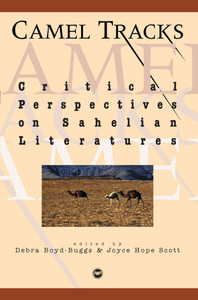 Camel Tracks is a new volume of critical essays on the francophone literatures of countries in the African Sahel, which includes large parts of countries that lie south of the Sahara desert. Too often defined as a geographical space (Burkina Faso, Chad, Mali, Mauritania, Mali, Niger, and Senegal), the Sahel is uniquely examined in this collection as a zone of literary creativity.

This collection features the work of seminal scholars that investigate both written and oral genres produced in this dynamic region, whose desert-like climate stirs up poetry, drama, and fiction in ways very different from those inspired by mountains and oceans. Divided into four sections, it reveals the richness and complexity of little-known texts, which will become increasingly important as Africa forms its literary canon and re-creates itself from the paradoxes and complexities that characterize it as a continent now.

This volume constitutes the first of its kind to be published in English and made available to researchers, teachers, and students in the anglophone world.

ABOUT THE EDITORS
DEBRA BOYD-BUGGS is an associate professor of French and francophone African and Caribbean literatures at Winston-Salem State University, Winston-Salem, NC.