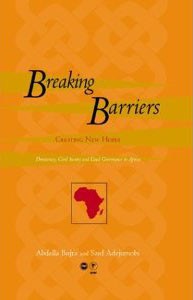 Africa in the last two decades has witnessed complex, intricate, but dynamic political struggles aimed at evolving a new culture of politics and norms of political governance. This process, which is largely variegated and contradictory, has seen dominant orthodoxy under attack, entrenched political habits giving way, old barriers gradually being deconstructed and new hopes emerging. The book interrogates Africa’s current strides towards democracy and good governance, and the interposition of the civil society in the process. It raises critical issues both at the level of theory and practical manifestation of those processes. It identifies and delineates the phases of those processes, examines key theoretical and methodological issues on the governance project, the nuance dimensions and perspectives to it, and reviews six country case studies on the progress so far. Hitherto neglected issues such as gender, pastoralism, ethnicity, constitutionalism, local governance, the economy and the African Union are analyzed within the governance discourse. The six country case studies covered are Botswana, Nigeria, Kenya, Ghana, Zambia and Ethiopia. The book offers a rigorous, comparative, and holistic approach to the issue of democracy and good governance in Africa.

Abdalla Bujra holds a Ph.D. in Sociology, and has been actively involved in the development of social science research and pan-African struggles in Africa for over the last three decades. He is a former executive secretary of the Council for the Development of Social Science Research in Africa (CODESRIA). Dakar, Senegal, directed the African Futures program, (Abidjan, Cote D’ ivore), was secretary of the International Panel of Eminent  Persons (IPEP) of the Organization of African Unity (OAU) established to investigate the genocide in Rwanda, and is currently the executive director of the Develoment Policy Management Forum (DPMF), based in Addis Ababa, Ethiopia.

Said Adejumobiholds a Ph.D. in Political Science, and is currently a senior lecturer in the Department of Political Science, Lagos State University, Lagos, Nigeria. He has written extensively on the issues of democratization and governance in Africa. His works include two co-edited books, The Political Economy of Nigeria under Military Rule: 1984-1993 (Harare: SAPES, 1995), The National Question in Nigeria: Comparative Perspectives (Aldershot: Ashgate, 2001), and a co-authored book, The Nigerian Military and the Crisis of Democratic Transition: A Study in the Monopoly of Power (Lagos: Civil Liberties Organization, 1999). His areas of research interest are political economy and comparative politics.