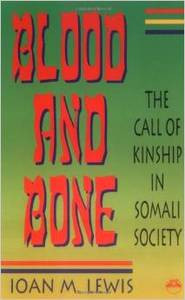 In Somali political culture, clan solidarity is represented by the evocative symbols of blood and bone - immutable natural endowments inherent in kinship traced through the father in the male line. This book explores the extraordinary persistence and resilience of these age-old loyalties. Grounded in the traditional life of the pastoral nomad, kinship is a multipurpose resource, the basis of the individual's social, political and economic security. Outside the local pastoral economy, it has proved equally adaptable in organizing labor migration and livestock trading in the gulf states. It survived and even flourished under the anti-clan regime of "scientific socialism" of 1970s Somalia, and played a crucial role in the most successful recent Somali guerilla movement. Above all, it dominates the 1990s crisis of the Somali state.

This analysis, which challenges contemporary anthropological understanding of kinship structures, is based on over forty years' research on the Somali people.

ABOUT THE AUTHOR
IOAN M. LEWIS has been professor of anthropology at the London School of Economics since 1969 and is also consultative director of the International African Institute. He has taught social anthropology in Africa, Asia, Northern America and Europe, and has written eighteen books -- five on different aspects of Somali culture and society. He is widely regarded as one of the world's authorities on Somali, and as a leading British social anthropologist.