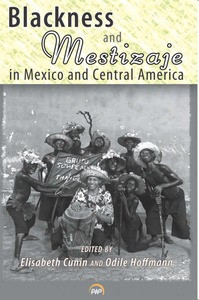 In the last decades of the twentieth century, black movements began to emerge as a visible force in Latin America, although in a very disperse form. Mexican and Central American configurations, because of their originality, force us to adopt plural visions, toward the margins, with particular emphasis on situations of mixtures and ambiguous categories (Afro-indigenous, creoles, mestizos), multiple belongings (national and transnational), or seemingly contradictory practices (black culture without black people, mobilization without ethnic claims).

Beyond the ideal of a homogenized citizenship produced by mestizaje, there are complex social dynamics based on difference and indifference, stigmatization and fascination, homogenization and othering. We believe that mestizaje is not only a "myth" and multiculturalism a "challenge" to it. The essays in this book investigate the different processes of racialization, ethnicization, and negotiation of the belongings that characterize mestizaje as multiculturalism.

ABOUT THE EDITORS
Elisabeth Cunin is sociologist at the Institut de Recherche pour le Développement (IRD-France) and at present member of the research group Migrations and Society (URMIS), at the University of Nice Sophia Antipolis. She has been associate researcher at the University of Quintana Roo and CIESAS (Centro de Investigación y Estudios Superiores en Antropología Social) in Mexico and at the University of Cartagena in Colombia.

Odile Hoffmannis geographer at the Institut de Recherche pour le Développement (IRD-France) and at present, a member of the research group Migrations and Society (URMIS), at the University Paris Diderot. Formerly the Director of CEMCA, the French Center for Mexican and Central American Studies, in Mexico, her research deals with afrodescendant population in Colombia, Mexico and Belize, particularly their spatial and territorial dynamics (www.odilehoffmann.com).