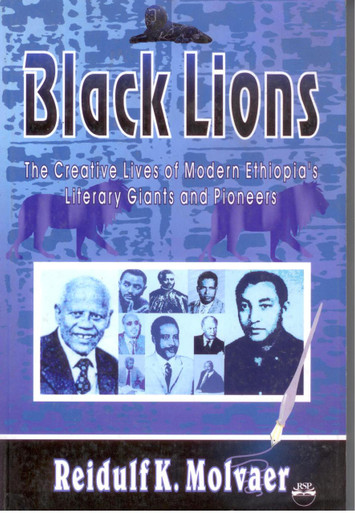 This is fascinating portrait of 20th-century Ethiopian writers and an in-depth analysis of the history of the development of Amharic literature and those who have shaped it. The range of writers covered varies from the aristocrats, educators, and pioneers to the latest revolutionary writers. A vivid picture of the personal development and progress of these writers is given, as well as the impact they have had on Ethiopian social, and political systems. All in all, this volume presents the portraits and sketches of thirty-two Ethiopian writers and lexicographers, including such notable literary giants as Hiruy Welde-Sillase, Girmacchew Tekle-Hawariyat, kebbede Mikael, Haddis Alemayyehu, Abbe Gubennya, Mammo Widdineth, Tseggaye Gebre-Medhin, Mengistu Lemma, Dannyachew Werqu, Birhanu Zerihun, and Ethiopia's foremost writer, the late Be'alu Girma, who was executed by the former military regime - the Dergue - for his critical novel 'Oromai.'

ABOUT THE AUTHOR
Reidulf K. Molvaer is a Norwegian well-versed in Amharic and Ethiopian literature and traditions. He spent 20 years in Africa (14 in Ethiopia and 6 in Kenya) working on a variety of development projects. He has published several books on Amharic literature and the history and social aspects of modern Ethiopia as well as various development issues relating to Africa. Dr. Molvaer received his M. Phil. and Ph.D. from London University. He is a member of the new York Academy of Sciences, as is currently a Senior Researcher in Oslo, Norway.