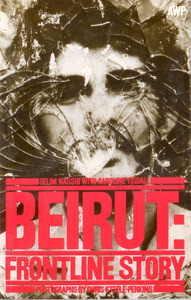 From June to September 1982, the battle for Beirut was the focus of international news. What did it feel like to be in the beseiged city during those months? Selim Nassib, who is Lebanese, was the reporter in Beirut  for Liberation, the French alternative daily newspaper. Living in west Beirut, Nassib was able to share the experiences of the Lebanese, Palestinian and Druze communities. The articles in Beirut: Frontline Story are selected from his despatches during this period.

Nassib interviews Yasser Arafat as they sail from Beirut. The massacres at the Sabra and Chatila camps take place two weeks later. In Beirut:Frontline Story, Caroline Tisdall interviews two doctors working in the camp's hospital and the Fatah fighter who led the resistance to the Lebanese units sent in to 'mop up'. These interviews, powerful and harrowing, directly contradict the Israeli government's version of the massacres.

Also in Beirut:Frontline Story are photographs taken by Chris Steele-Perkins. They give yet another dimension to our understanding of what it was like to be in Beirut during those fateful months.