BACK TO AFRICA: George Ross and The Maroons: From Nova Scotia to Sierra Leone, by Mavis C. Campbell 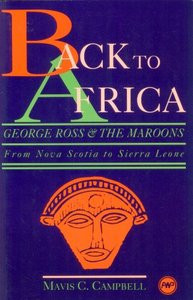 BACK TO AFRICA: George Ross and The Maroons: From Nova Scotia to Sierra Leone, by Mavis C. Campbell

Back to Africa is the odyssey of a group of blacks of the diaspora who made their sojourn from Jamaica to Nova Scotia and finally to Sierra Leone in West Africa at the beginning of the nineteenth century. In this newly formed West African society, they encountered two other black groups from the diaspora who had previously made their return home back to Africa, the chief of these being the African Americas who won their freedom by fighting on the side of the British during the American War of Independence, and were also sent first to Nova Scotia before going to Sierra Leone. In Sierra Leone at least one of these African Americans actually became re-united with his mother from whom he had been kidnapped and sold into slavery some fifteen years before.

Back to Africa gives insights into the lineages among African, Caribbean and African American history on African soil, and should therefore make for a better understanding of the way these and other African people from the diaspora, such as Paul Cuffee's group, and others from Africa like the "liberated Africans" were to form the very nucleus of the important Creole society of Sierra Leone.

ABOUT THE AUTHOR
MAVIS C. CAMPBELL, Professor of History, Amherst College, has a Ph.D. from the London School of Economics & Political Science. She has published widely. Among her major publications are: The Dynamics of Change in a Slave Society (1976) and The Maroons of Jamaica 1655-1796: A History of Resistance, Collaboration and Betrayal (1988). Choice magazine nominated the latter as one of the "Outstanding Academic Books" of 1988-1989.