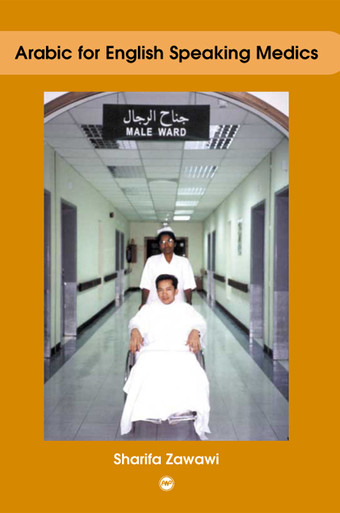 Arabic for English Speaking Medics is based on simple conversations that typically take place in familiar medic-patient situations. These provide the learner with the words and phrases most commonly used in medical settings as the hospital bedside and the admissions desk. As a reference tool, it may also be helpful in improving communication between English-speaking and Arabic-speaking medics.

In addition, this book portrays situations outside the hospital setting. It contains conversations about local cultural and religious practices and customs that are aimed at creating an understanding relationship between medic and the community within the Arabic speaking environment of the workplace.

The learner is not required to learn a new script. This textbook presents the Arabic language in the English alphabet. Grammatical rules are kept to a minimum. A glossary of medical and non-medical terms is provided.

Expatriate medics need quick access to the language of those with whom they work, whether patients or hospital ancillary staff. By combining their medical with a few linguistic skills, they will function better in their work settings. Failure to communicate effectively can lead to serious problems. It can threaten the medics professional credibility and it can endanger the physical well being of the patient. This book was written in collaboration with the administrative and nursing staff of Seif bin Ghobash Hospital in Fas Al-Khaimah, the United Arab Emirates.

ABOUT THE AUTHOR
SHARIFA ZAWAWI is Professor Emeritus of Linguistics, Arabic and Swahili, and Middle Eastern Languages and Cultures at The City College of the City University of New York (CUNY). She has taught at Columbia University and New York University. She has worked as a language consultant and examiner for several universities in the US. She is the author of "Kiswahili Kwa Kitendo," "Say it in Swahili," "Loan Words and their Effect on the Classification of Swahili Nominals," and "Fast Track Swahili." With Africa World Press she has published "Kiswahili Kwa Kitendo, Vol I" (1980), "Learn our Kiswahili, Vol. II: Jifunze Kiswahili Chetu" (1993), "Converse Kiswahili: Onega" (1991), "Whats in a Name? Unaitwaje? A Swahili Book of Names" (1993) and "African Muslim Names: Images and Identities" (1998).