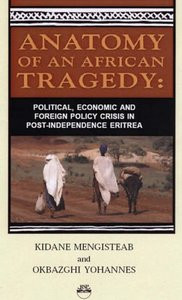 This timely and unique book is an analytical study of post-liberation Eritrea. The work offers an extraordinary account of the events and developments that have taken place in the country’s politics, economy and foreign relations and of the things that have gone wrong since independence. By focusing on the economy, constitutional development or lack thereof, and foreign relations, the book illuminates objectively the internal and external difficulties and constraints the country faced in building a democratic society, viable economy, and sustainable foreign policy after liberation. Mengisteab and Yohannes insightfully demonstrate the structural and historical conditions and leadership patterns that account for the striking similarities between post-colonial Eritrea and post-colonial African states. The book makes an enormous contribution not only to the study of contemporary Eritrea but also to the comparative study of African politics and government. Since there is no work to date that treats the economy, politics and diplomacy of Eritrea from a comparative perspective, this timely book will go a long way in closing the gap in our understanding of post-liberation Eritrea, and the post-colonial African state as well.

ABOUT THE AUTHORS
KIDANE MENGISTEAB is Professor of African Studies and Political Science at the Pennsylvania State University. His current research interests include globalization and its implications on Africa’s development, Africa’s democratization in the era of globalization, and relevance of Africa’s traditional institutions on conflict resolution and institution building in contemporary Africa. His earlier work includes Ethiopia: Failure of Land Reform and Agricultural Crisis; Globalization and Autocentricity in Africa’s Development in the 21st Century; State Building and Democratization in Africa: Faith, Hope and Realities, (co-ed); Globalization and the Dilemmas of the State in the South, (co-ed); and Beyond Economic Liberalization in Africa: Structural Adjustment and the Alternatives, (co-ed).