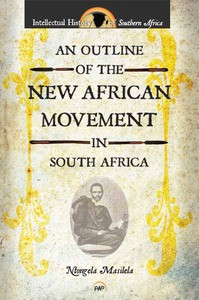 The New African Movement which stretched over a century from about 1862 (Tiyo Soga) to 1960 (Ezekiel Mphahlele) consisted of writers, political and religious leaders, artists, teachers, scientists who called themselves New Africans, specifically New African intellectuals, to distinguish themselves from the Old Africans since they were engaged with creating knowledge of modernity (new ideas, new perspectives, new objectives, new formulations) rather than finding consolation in the old ways of traditional societies. The New African intellectuals did not necessarily reject tradition but attempted to reconcile it to the historical imperatives of the progressive and new ways of formulating and creating political and cultural practices. The historical experience of modernity was triggered in South Africa by the arrival of British imperial capitalism in the early years of the nineteenth century which implanted “European modernity” through colonialism and imperialism in order to effect the simultaneous combined process of exploiting the natural resources of the territory while at the same time undertaking through Christianity and modern education a “civilizing mission” among the indigenous people (consisting initially of San [‘Bushmen’] and Khoe [‘Hottentots’]) and black Africans.

It was Pixley ka Isaka Seme (1880-1951) who invented the idea and concept of New African Movement with his great manifesto of 1906 (“The Regeneration of Africa”, Journal of African Society, vol. 5, 1905-1906, pp. 404-408) which pronounced the historical necessity of creating and forging of a complex “New African modernity” whose central nature would be liberation and decolonization by challenging, contesting and decentralizing the hegemonic form of “European modernity” that was occupying the cultural geography and the social topography of the territory that was four years later to be known as the Union of South Africa, as well as colonizing and dominating the historical imagination of all the oppressed and exploited people therein. In another historic document of 1911 (“Proposed Native Congress”, Imvo Zabantsundu, December 5), in response to the unholy alliance of British imperialism and Afrikaner segregationist interests that formed the Union of South Africa which excluded the aspirations and legitimate concerns of the oppressed people, Pixley ka Isaka Seme called for the founding of a political organization that would represent the national interests of the African people. On January 8, 1912 African National Congress (until 1925 it was known as the South African Native National Congress) was founded and launched in Bloemfontein. From this moment of 1912 onwards until the Sharpeville Massacre of 1960 when the Apartheid State banned the African National Congress as well as other political organisations (the Pan Africanist Congress, the Communist Party of South Africa had already been banned in 1951) and strangulated the New African Movement, these respective modern institutional instruments of liberation and articulation were inseparable from each other in that: the African National Congress was the political practice of the New African Movement, and likewise, the New African Movement was the intellectual and cultural expression of the African National Congress.