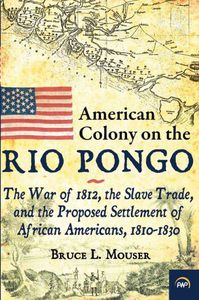 When Americans looked to the African coast in the 1810 to 1830 period for areas in which they could settle large numbers of free and freed African Americans, they considered the Rio Pongo. There were no large states to oppose them, and those Africans who governed land use were agreeable and accustomed to Europeans/Americans living in their river. There were numerous wharfs to serve their needs. Land was cleared and sparsely populated. Trade paths connected the Pongo to the Niger River networks. But there also were obstacles. Slave trading in the Pongo was giving way to plantation slavery, and African Americans would be forced to work and live alongside it or compete with it. A different style of creolization had occurred in the Pongo, with the ruling class connected to slave trading families. British officials at Freetown, Sierra Leone, were convinced that Americans were planning an encirclement of British commercial interests and the ultimate collapse of British influence along this section of coast. This study examines American interests and reasons an American colony failed to be established. It also reviews the creole families that dominated the Pongo’s commerce in the 1820s.

“Bruce Mouser, without any doubt, is the foremost specialist in reconstructing the complex history of the southern rivers of the upper Guinea coast. In this magnificent study, he traces the destiny of the Rio Pongo between 1810 and 1830 when it was caught between the continued prosecution of the slave trade and an attempt to establish a colony to be populated by African Americans liberated from slavery.”

“A cornucopia of scholarship incorporating a half-century of research, an invaluable reference work for this area of Western Africa.”

“A brilliant mosaic that synthesizes the lives of dozens of traders, and makes it possible to understand the intricate networks of their African/American/European families and fortunes.”

“Drawing on his unrivalled knowledge of this region, Mouser constructs a nuanced, sophisticated and erudite analysis of the interaction between competing interest groups and families on the Upper Guinea Coast in the late eighteenth and early nineteenth century.”

—Suzanne Schwarz, University of Worcester, author of Slave Captain: The Career of James Irving in the Liverpool Slave Trade

“Mouser’s meticulous reconstruction of family networks, the fruit of intensive archival research, is characteristic of this extraordinarily well-documented study. What a great book this is.”

“A deeply-researched and needed exploration of the racial, economic and geopolitical dynamics which helped to deflect American colonization of free blacks from the Rio Pongo region of today’s Republic of Guinea to Liberia.”

BRUCE L. MOUSER is Professor Emeritus in History at the University of Wisconsin-La Crosse. He has authored numerous books, chapters, and articles on the histories of the slave and caravan trades, focusing on the pre-colonial transition to legitimate commerce and the evolution of political and commercial elites upon the Guinea and Sierra Leone coasts. His primary area of interest is the Rio Pongo in Guinea/Conakry.

SERIES
The Harriet Tubman Series on the African Diaspora