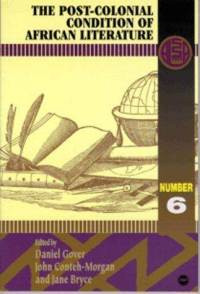 The ten articles on African literature in this collection were chosen from the 1995 conference of the African Literature Association held in Columbus, Ohio. The theme of that conference, "The Post-Colonial Condition of African Literature," has been broadly interpreted in both practical and theoretical ways by our writers. Most of them simply use the phrase "Post-colonial" to refer to contemporary writings in Africa and the African diaspora.

Other examine the more theoretical aspects of post-colonial culture, especially as it illuminates the complex relationship between Africa and the West. Still other essays are concerned with feminist critiques of African literature.

John Conteh-Morgan is an associate professor of French and Francophone Literature at Ohio State Univesity. He is the author of Theatre and Drama in Francophone Africa (Cambridge UP 1994), and an associate editor of Research in African Literatures.

Jane Bryce, who is originally from Tanzania, is currently a lecturer in African literature and creative writing at the Barbados campus of the Univesity of the West Indies. Her critical writing has been published in many anthologies including Motherlands, Writing and Africa and Readings in African Popular Culture.